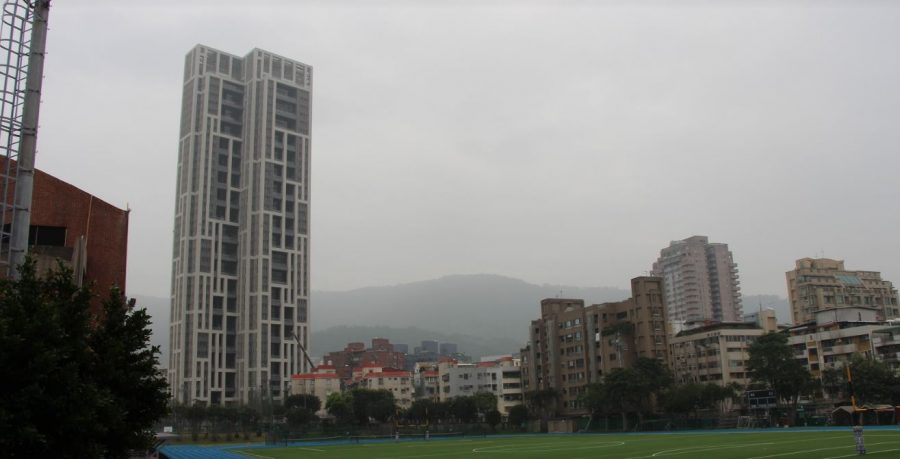 (Image above) A hazy day in Taipei: On Friday, January 6, 2017, the AQI reached 130, at which, some of the healthy population may experience eye irritation, sneezing, or coughing.

The pollution in Taiwan has made itself well known for the past few months. With the school year well underway, there have been several instances of extremely bad air quality when no one could go outside. Now, days when it is possible to stand on the Lower Field and clearly see the mountain behind B-block without a sheet of grey haze are growing rarer.

Garett H. (11), a IASAS Cross Country runner, trains 10 kilometers a day, five to six times a week. With the air quality lately, he claims he has had to train on treadmill five times in the past month.  He now checks the AQI daily to ensure he is running in good conditions.

Air quality, measured in the unitless quantity of AQI (Air Quality Index), ranges from 0 – 50. The AQI is determined by many factors including particulate matter: PM 2.5 and PM 10 which is basically dust in the air. The PM 2.5 category represents the smaller particles that can be absorbed into your lungs while the PM 10 category represents larger air particles.

Prior to the 2015-16 school year, there was no AQI limit for outdoor activity at school. Meaning, it was more than likely that students have been out in bad conditions because there was no air quality standard. It is mainly Mr. Mueller, the Athletics Director, who monitors the air quality and notifies the other teachers and administration if it reaches above 150. Many factors go into consideration, like depending on the sport that is going on outside—like whether is it high intensity running or golfing. The AQI Breakdown on the TAS website also shows more guidelines, such as the required conditions for IASAS trips or exchanges.

On a pretty good day in the Shilin District, the air quality is in the mid 70s. The PM 2.5 µg/m^3 goes from 9 to 97, where the maximum level for the day is eight times what is recommended by the World Health Organization. This is not too bad compared to other parts of the world. In Zabol, Iran, the yearly average of PM 2.5 µg/m^3 is 217, six times the amount which the World Health Organization considers a “major health risk” and eighteen times the recommended level. Compared to the other IASAS schools, athletes who have traveled to Jakarta, Singapore and Kuala Lumpur claim we are lucky in comparison. There have been instances of Pre-IASAS exchange cancellations because of the air pollution.

The acceptable air quality standard for outdoor activity at Taipei American School is anything lower than 150. After reaching 150 it is considered “unhealthy for sensitive groups”. At this 150 point, all outdoor PE lessons and sports practices are stopped. This is not an uncommon occurrence for outdoor sports this season. On January 5, 2017, the JV vs. MS Athletics Touch Rugby game was cancelled due to poor air quality. Chloe M. (9) from Varsity Touch Rugby says, “One of our Terrible Tuesdays was cancelled because of the pollution. We moved the desks around and worked out in one of the middle school science classrooms.”

Members of the TAS community are taking action to combat the problem. Garett says that since pollution and the environment impacts his training, “To reduce air pollution in my power I will try to commute on public transport as much as possible. As for the global warming issue I started to not rely on my air conditioner last summer, so that was a start.” Ms. Cheng, Upper School Mandarin teacher, is very aware of the pollution and environment problems. She often expresses her concern and talks to her students about it. To do her part to fix the issue, she always separates her trash, and recycles often to prevent the amount of waste that is burned. She is also vegan and strictly buys locally grown products. When asked why she cares about the environment so much, she says “Of course it is important. To keep the Earth going we all have to do our part and there is a lot of work you can do.” Most importantly, Ms. Cheng thinks that TAS should put more emphasis on environmental issues to educate young people because international students have the privilege of being exposed to many opportunities and experiences.