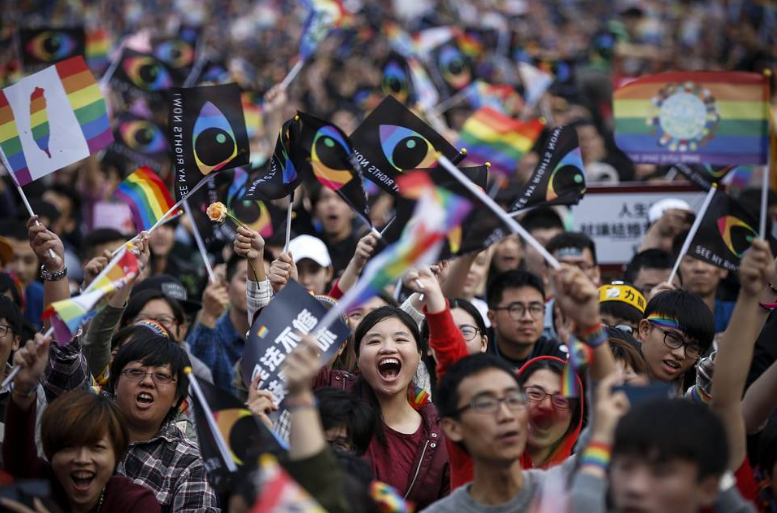 Love is love. Only 22 countries out of 196 countries in the world have legalized same sex marriage. Without a bill legalizing same-sex marriage, gay people around the world are being being restricted from marrying their loved ones. But that is not all, gay couples do not have the same rights as straight couples.  If a person in a gay relationship dies, their partner does not receive right to their properties.  Not only that gay couples do not both receive child custody.  This is the cause of many troubles as the children are split from their family.

While only 22 countries legalized gay marriage, there are 13 countries in the world that see homosexual actions punishable by death, for example, Qatar, Iran, and Saudi Arabia. Taiwan is currently making big progress with LGBTQ issues. Taiwan is becoming known as one of the most progressive countries in Asia, and our community is taking big strides towards marriage rights for all. Every year Taiwan hosts a gay parade that is one of the biggest ones in Asia. Annabel Uhlman, recounts her experience, “The whole vibe was nice and I felt part of the community.  I could feel the love in everybody. People were cheering and supporting one another.” The rally is supported by LGTBQ people from all over the world and this year it attracted over 80,000 people.  The acceptance towards LGBTQ community is rapidly growing in Taiwan. Late last year, the legislature submitted a bill to Parliament that proposed changing the definition of marriage to union between two people, rather than between a man and woman. Although there is not a definite time to when it will be approved, if it is approved, same-sex marriage could be happening in the late 2017.  There have been multiple attempts in the past to submit a bill like this, but they were all not successful. All the past submitted bills were rejected. “Nobody has the right to take rights like marriage away from others” says Karen Dalton, supporter of same sex marriage. This year, there is more hope for the legalization of same-sex marriage. President, Tsai-Ing Wen has openly proclaimed her support for same-sex marriage and gay rights while the Democratic Progressive Party has also been largely supportive of gay rights. According to a public poll, it shows that the Taiwanese society is evenly split between legalizing same-sex marriage.

“Why call it gay rights when it is a human right?” exclaims Becky Roffler (11), an advocate for same sex-marriage. Everyone deserves unconditional love. Everyone deserves to have someone who can spend the rest their lives with. Everyone has the right to a happy and fulfilling marriage with the one they love. Why are we taking this right away from people? LGTBQ people deserve to be seen as equal in the eyes of law and in society. All citizens of Taiwan should be able to receive the same rights and freedom.