Breaking into the future 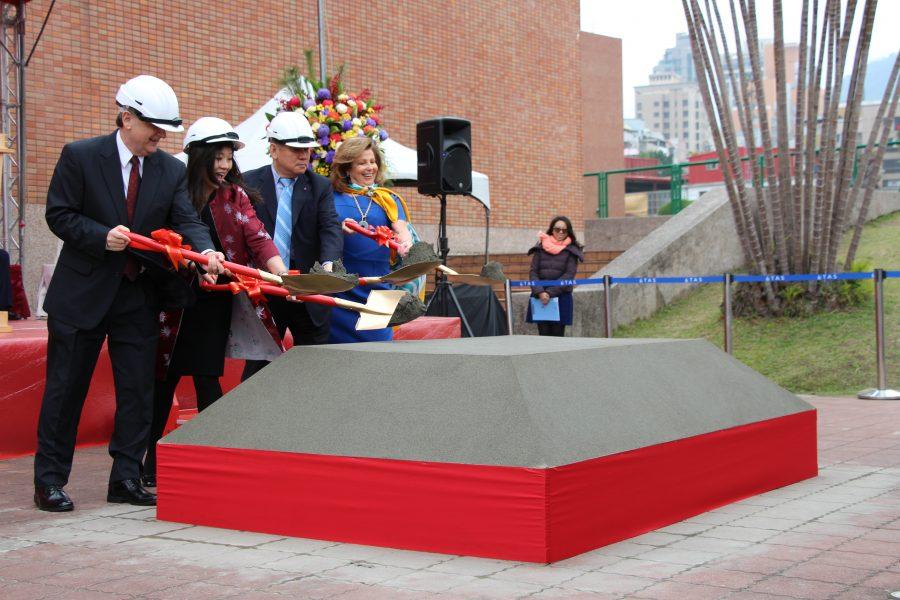 On March 2, the Tech Cube’s groundbreaking ceremony initiated the construction of the new Taipei American School STEAM building between the Lower and Upper Fields. Faculty and student representatives from the Lower, Middle, and Upper Schools were all in attendance, as were TAS board members. Special guests such as lead donor R. Wong and other major donors also attended along with the Tech Cube architects and developers (KHL Architects, Parsons Brinkerhoff, and I-Cheng Corporation). The ceremony was headlined by speeches from Chairman of the Board Tina Koo, and Superintendent Dr. Hennessy.
“One of the jobs of the board is to look to the future,” Mrs. Koo said as she opened the ceremony. After the construction of the Upper School D-Block in 2012, TAS saw a new state of the art scientific research and robotics floor.
However, within a few months, the administration identified a new issue: space. “We seemed to outgrow that facility partly due to the demand of the children and the students taking more courses in those areas…and also of all the burgeoning clubs, and the research, and all the programs that have been driven from those facilities,” Mrs. Koo said.
As a result, the administration traveled around the world looking at the facilities of different universities in hopes of inspiring the design for TAS’s very own Tech Cube. “I made a visit to MIT about three or four years ago…and I saw what could happen in a particular kind of tech center…I could see the excitement,” Dr. Hennessy said.
When it comes to the execution of the vision of the administration, there is a Tech Cube task force made of members of the TAS community and board members. “The group meets every month to review progress and since the administration has a very detailed plan, we also work with building consultants to make the contractor’s are on target,” said Mrs. Koo.
The building itself will be something that TAS has never seen before. “Each of TAS’s buildings have had different features in their three stages. The first building was an all purpose building that fitted the generation, the Upper School was more shaded and entered an environmental stage, and now the Tech Cube will be lighter in weight. Since the building is situated in the middle of the school, the first floor will have a high ceiling and open space so that both the Upper Field and the track in the lower field will feel connected. I don’t want the school to feel like it is cut in half by the Tech Cube,”  Simon Kao, Principal Architect of KHL Architects said.
While the building will have many exciting new features, the challenges that Mr. Kao has to face makes it the hardest building that he has created at TAS. “The structure is going to be a pretty hard challenge because we will be using a curtain wall with diamond-shaped windows while the connecting of the bridges will be difficult as well. I think the building will be harder to construct than the Upper School,” he said.
The Tech Cube is scheduled to be open for student use in September of 2018. “Our students will now have the best resources to be prepared to adapt and succeed anyway in the rapidly changing world,” said Mrs. Koo.
However, Dr. Hennessy believes that the impact of the Tech Cube will extend beyond TAS and possibly even Taiwan itself. “It will be the best in Asia…we will be helping the schools from around Asia to join in what is an essential next step for 21st century education.”