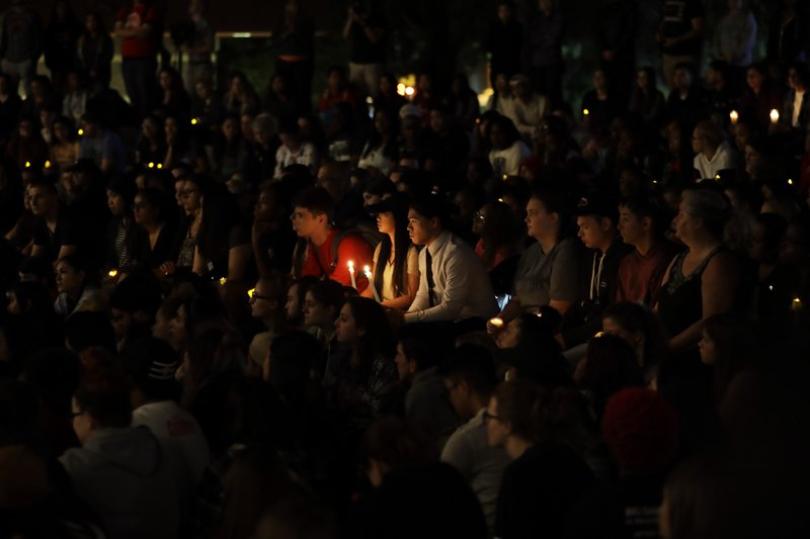 Ivan Yang (’17) was heading to his dorm room at the University of Nevada, Las Vegas from his friend’s house when he heard sirens. “I was in the car with my guys on the strip just a few minutes away from Mandalay Bay,” he says. “We pulled over to the side and around 10 cop cars drove by, along with the special forces and tanks. It was more intense than what you see in video games and movies.” The group drove back to campus. When they turned on the TV in their rooms, they realized they had witnessed America’s worst mass shooting: a gunman had opened fire on a country music festival at the Las Vegas Strip from his hotel room in the Mandalay Bay Casino and Resort. The gunman had injured least 500 people, and killed 58.
Days later, members of Ivan’s community continue to struggle with the fallout. “We try to stay positive, but many are grieving,” he says. “Many have stepped up to support those affected, donating food, water, blood, and goods. Our school opened up a center for the evacuees who needed a place to stay. The university cancelled many classes this week for the students that have family and friends in the hospital fighting for their lives.”
Having only graduated from TAS last year, Ivan finds it unnerving that such a tragic event occurred during a new stage in his life.  “I’m just shocked, mostly. I’ve only been here for a little over a month, and one of the biggest shootings in US history just went down a few miles away from where I am,” he says. “I am aware that the US is no longer a safe place to live, especially with the issue of gun violence and people abusing their rights.”
In the United States, the right to bear arms is guaranteed as an essential component of the country’s Constitution. In sharp contrast with America’s policy, however, Taiwan’s arms laws are some of the toughest in the world. The government does not allow civilians to possess guns in the country, with few exceptions. In 2002, the Taiwanese government passed a Statute for Management of Self-Defense Firearms in order to further eliminate illegal use of arms. Now, fewer than five percent of civilians have access to guns, most of whom are aboriginal Taiwanese people who use guns for hunting.
“There were bullets raining down from the sky. No ‘good guy with a gun’ could possibly stop that.”
Meanwhile, TAS alumni across America are fearful and hopeful about the future. “This is a really sad thing, but because of so many shootings over the past couple of years, I feel numb, even insulated, from the violence,” says Cashua W. (‘17), who lives in California. At least twelve people from her state had been injured in the Mandalay Bay shooting. “I’m just praying that I’ll never be in such a situation. These things are so out of our control.”

Another California resident, Melissa Cho (’17), says that her university has also been affected. “I do know that there was one Chapman student who got shot and injured during the shooting,” she says. “Luckily, he’s safe. But a week ago I was doing homework with another friend, and that time we both agreed that 2017 was way better than 2016. Literally the next day when I woke up, 2017 had taken an L again.”

As American citizens, Cashua and Melissa hope that legislators will soon take action to prevent the event from happening again. “I keep wondering when any action on gun control will actually happen,” says Cashua. “Bullets rained down from the sky. No ‘good guy with a gun’ could possibly stop that.”