Trump vs. the sports world 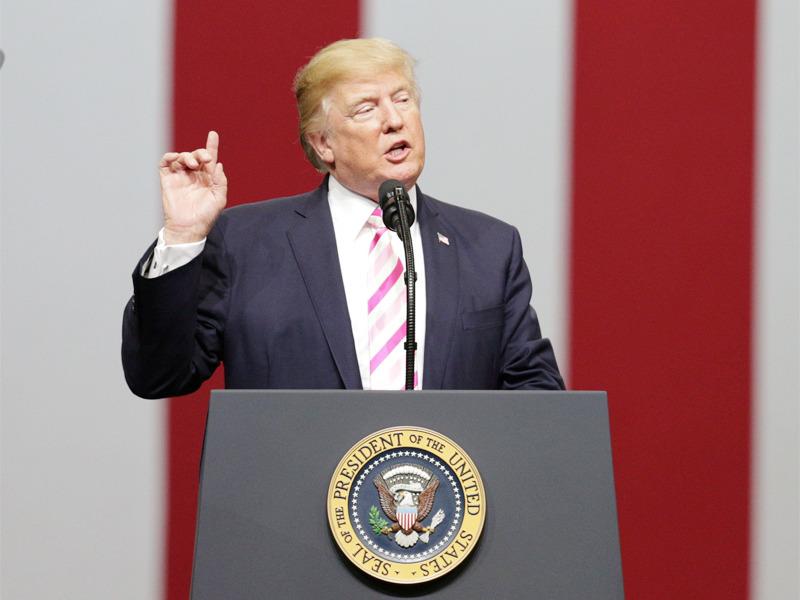 The President of the United States, Donald Trump, has been very active in the sports world recently. After releasing controversial statements against the players in the NFL, who have been protesting the national anthem, multiple professional sports leagues have all initiated counter-demonstrations.
On Sept. 22, during a speech in Huntsville, Alabama, President Trump said, “’Wouldn’t you love to see one of these NFL owners, when somebody disrespects our flag, to say, ‘Get that son of a b—- off the field right now. Out! He’s fired.’” The national anthem protests, sparked by NFL player Colin Kaepernick, began when Kaepernick kneeled or sat during the national anthem. The demonstrations had slowly been dying down, but President Trump’s denunciation of the protests unexpectedly re-energized the anthem demonstrations within the NFL.
The Jacksonville Jaguars and the Baltimore Ravens were the first to act on Sept. 24. Players and staff of both teams locked arms during the national anthem, before their game in London. Along with the twenty-seven members of both teams, Jaguar’s owner, Shahid Khan, also took part in the anthem demonstration. The day after, the Tennessee Titans and the Seattle Seahawks both announced that the players would stay in the locker room during the national anthem. Staying true to their statement, not a single player took the field 30 minutes later for the game. The three aforementioned games were only a few of the subsequent national anthem demonstrations throughout the league.


Unexpectedly, kneeling during the national anthem even made its way to MLB as well. On Sept. 24, Oakland Athletics’ rookie catcher, Bruce Maxwell, became the first MLB player to take a knee during the anthem. According to Jane Lee from the official MLB website, Maxwell said, “I’m kneeling for people that don’t have a voice…but I’m in no way or form disrespecting my country or my flag.”
Similarly, players from the WNBA and the National Basketball Association (NBA), and the have also begun to do the same. On Sept. 24, before Game 1 of the WNBA Finals, the Los Angeles Sparks players decided to stay in their locker rooms, and the Minnesota Lynx locked arms during the national anthem. Meanwhile, the Los Angeles Lakers, along with other NBA teams, locked arms in the team’s first preseason game. According to ESPN, the team plans on locking arms throughout the entire season: Lakers Head Coach Luke Walton says, “by locking arms, I feel like we are showing that there are issues in this country, and it is a chance for us to raise awareness and still make it a talking point.”
On a deeper level, History teacher Mr. Jordan Brown, believes that it is inappropriate to play the national anthem before a sporting event to begin with. “I don’t find it troublesome for people to use their positions as sports stars to highlight social problems,” says Mr. Brown. “Those who have the ability to reach many other people, ought to have the right do so, especially for what I see as a just cause that needs to be addressed if America wants to meet its ideals as a nation.”
Delete Image
Align Left
Align Center
Align Right
Align Left
Align Center
Delete Heading