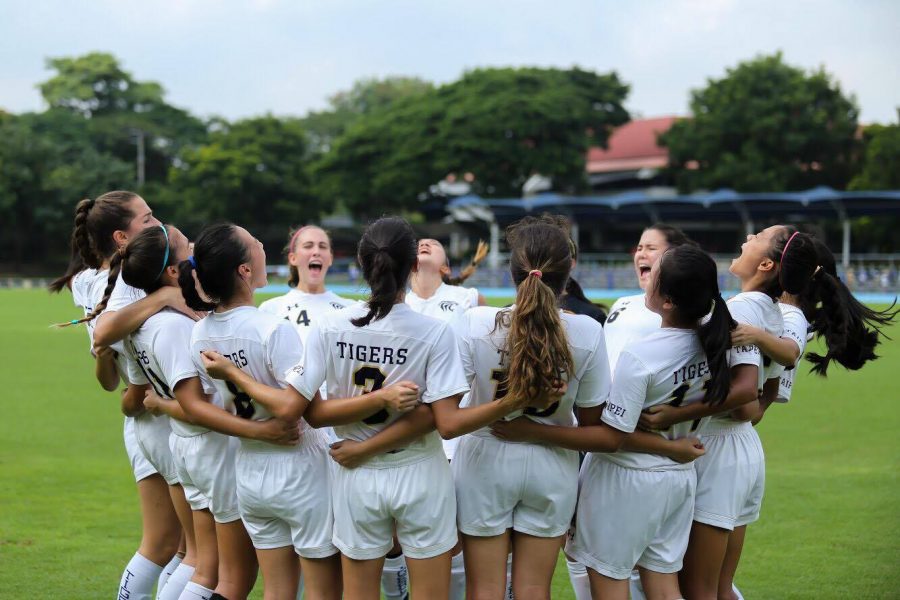 The TAS IASAS girls soccer team won a silver medal, their second in a row. Their championship game was cancelled due to thunderstorms, putting TAS in second place based upon round-robin point rankings. “After four years of work—three times in the finals, never gold—it completely crushed [co-captain Shantih Whiteford (‘18) and I] that we once again could not get the first gold for TAS girls,” says co-captain Kayleigh Chen (‘18).
The team achieved a 1-0 win against International School of Kuala Lumpur, a 0-0 tie against both Jakarta Intercultural School and International School of Manila, and a 2-1 loss against International School of Bangkok.
Their qualifying game against Singapore American School, the girls’ last game, saw a goal scored by Maggie Lee (‘19) in the last five minutes of the game. Her goal secured the girls a 1-0 win, the first time a TAS girls soccer team had defeated SAS in IASAS history.
Shantih, Sydney Hu (‘19), and Bianca Tseng (‘19) received all-tournament honors. Co-captain Shantih is satisfied with her team’s performance. She says, “We played hard, stepped up, and pushed ourselves to the limit.” With a young team currently including five freshmen, the girls will be ready for another shot at first place next year.
Meanwhile, the boys’ first game was a frustrating 4-0 loss against ISB. Against ISKL, wet grass contributed to the boys’ 3-1 victory, which represented many of the players’ first-ever IASAS win and ended TAS’ 16-game losing streak. “We play the ball on the ground as much as possible, so we are more accustomed to the way the ball moves on the floor,” says captain Oliver Feuerhahn (‘18). “Teams that play the ball in the air, like ISKL, can’t score with headers because of how wet the ball is.”
Re-energized, the boys next played ISM and SAS, but last-minute goals during both games put the team out of the finals. The TAS team went on to defeat JIS 3-0 in their final IASAS game, clinching the boys the bronze medal.
For their strong performances at IASAS, Alexander Chen (‘19), Ethan Hu (‘18), and Scott Kang (‘18) received  all-tournament honors. Oliver remains optimistic about the team’s chances next year. He says, “We were so close to gold, and I’m confident that a year from now I’ll be jealous that I didn’t get to be on the record-breaking, gold-medal-winning, incredibly handsome IASAS 2018 boys soccer team.”