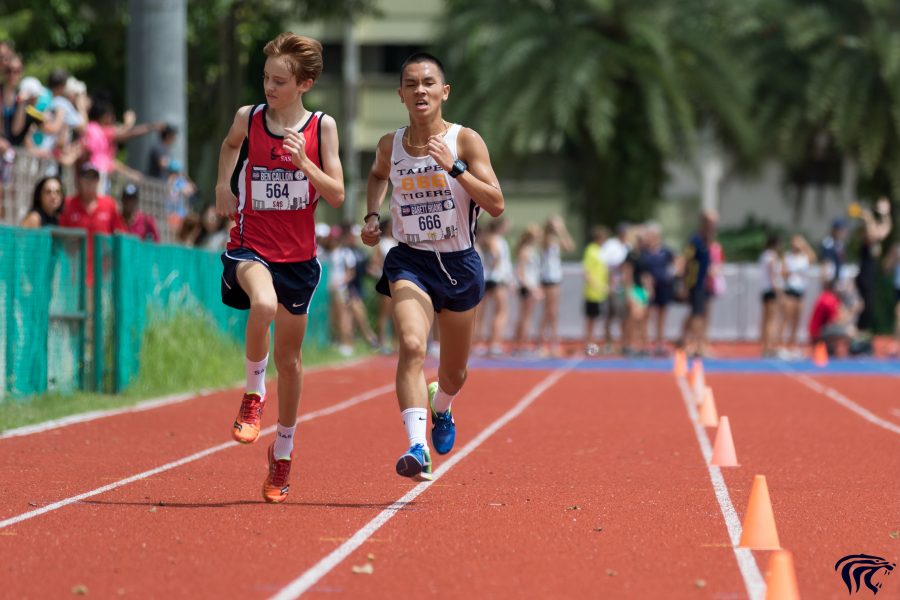 The TAS boys’ cross country team won a bronze medal in the IASAS Cross Country Championships, marking the first time the team has medalled in 11 years.
“I feel good about this win, because that was our goal. International School of Manila looked better [than us] at Pre-IASAS, and our goal … was to try to beat them,” says Coach Edward Hillmann. Team captain Timothy Fuh (‘18) believes that his team as a whole performed phenomenally. He says, “It felt amazing finally bringing home a medal. Everyone ran a personal best.”
Garett Huang (‘18) and Charlie Hogue (‘19) performed exceptionally during the five kilometer race. Both finished under 18 minutes, with Garett running a time of 17:09 and Charlie running a time of 17:20. In the three kilometer time trials, the team also finished third with a combined time of 70:27.
Moving forward, the team will be graduating top runners Garett and Timothy. Taking their place as veterans on the team will be Charlie Hogue (‘19) and Guo Chen (‘19). “We’ll have to rebuild next year. The good news is, we have the people to do that,” said Coach Hillmann. “The important thing is that we train year-round. You beat Singapore by out-training them.”
The girls’ cross country team placed fifth at IASAS. When asked about their finish, team captain Emily Kao (‘19) said simply, “I’m proud.” Coach Steve Anderson elaborates, “Evelyn Lai (‘20) and Sarahi Zuniga (‘20) ran phenomenally well. Unfortunately, injuries and sickness affected other runners. They certainly didn’t lack effort during the season.”
During the five kilometer race,  Evelyn and Sarahi both finished under 22 minutes, with Evelyn running a time of 21:04 and Sarahi running a time of 21:11. During the three kilometer time trials, Evelyn came in third out of all IASAS runners, with a time of 11:01.
Next year, the team will likely be returning all of its IASAS runners. Captains Emily and Anya Lai (‘19) will be looked upon to provide veteran leadership for this young team. “We were all really sad about getting fifth, but we looked on the bright side and moved on,” says Emily. Coach Anderson adds, “our young team had a good learning experience. Their motivation will be sky high next year.”