Opinion | Who and what am I? 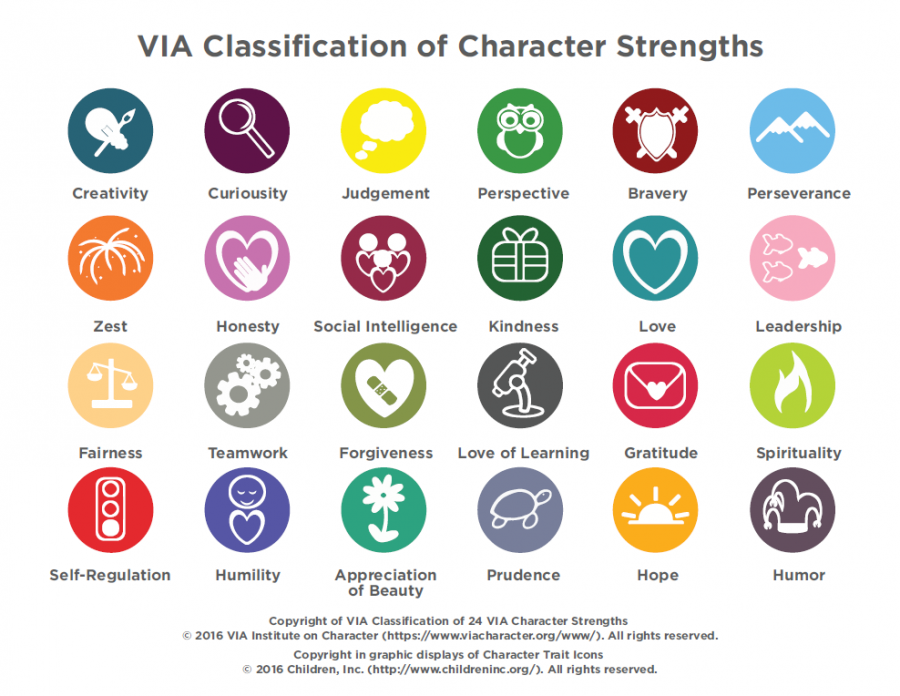 Forgiveness. Creativity. Humility. Zest. Hope. Prudence. Curiosity. Last month, all Upper School students took the VIA Classification of Character Strengths test in their advisory groups. The test offered 24 characteristics which individuals were ranked by. An individual’s strongest to weakest character trait of the 24 was revealed at the end of the test. Students were assigned five “top” character strengths based off of a 10-minute test, and instructed to focus on those top five to make the community a better place.
While students were instructed to focus on their top five character strengths and were advised to expand on those best traits to essentially make the community a better place, many did not know what to make of their results, or were simply dubious of them.
There is good reason not to place too much weight by personality tests. First of all, a myriad of external factors could influence these tests and affect the accuracy of an individual’s results. The most common example is if an individual answers the personality test questions with answers they think are the “correct,” socially favorable answers that do not truly reflect their personality. Questions such as “are you funny?” are extremely inaccurate as it induces self-bias.
Furthermore, personality tests are inherently subjective, as the results of a test depend on how well the questions are written and on the aims of the person designing them. Social studies teacher Mr. Luke Walker says that results should be “taken with a grain of salt.” This rings even more true when one considers how individuals, especially teenagers, are subject to constant change. Our cells regenerate every seven years, so technically we have become different people several times over already.
The self-fulfilling prophecy also has a significant affect on how individuals take results, which is why personality test results need to be taken with a grain of salt. “While personality tests are well-intentioned, they are limited in use,” says Dr. Nicholas Coburn-Palo. The point of the test is not necessarily “to find out who you are,” says Mr. Walker. “[The point is] finding qualities that you don’t know about.” A common trend for test-takers is to gravitate towards their strongercharacteristics and believe that the weaker characteristics just cannot be improved on.
“What’s important is for students to have a discussion of the subject of the personality tests before taking one and then reflect upon it. If you’re going to get anything out of it, you’re going to have to wrestle with the results,” says Mr. Walker. Dr Coburn-Palo adds that “[Personality tests] tend to take the most optimistic view of how malleable the personality is. Ultimately, you just have to be aware of the limitations and associations of them.”
Personality tests don’t define us. Whether you like your results or not, you should not place too much emphasis on them.