Lights, camera, action: 48 hours in the life of a film student 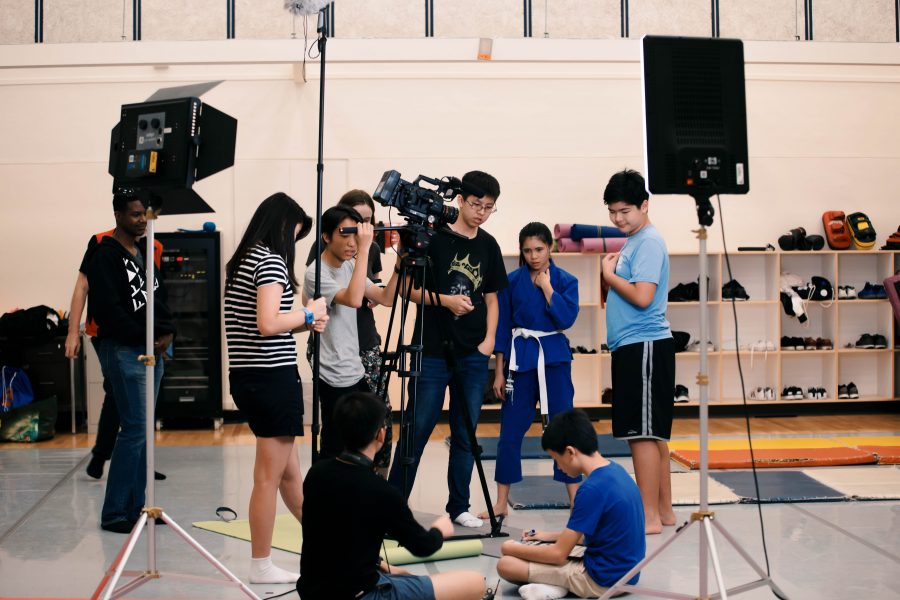 “Mr. [Brett] Barrus changed the prompt,” says Mr. Tobie Openshaw. “You’re doing a martial arts film now.” 40 minutes prior, they had received a text message from  film teacher Mr. Barrus, containing the assigned genre, as well as one character, prop, and line of dialogue. Dialogue: “You’re joking, right?” Character: a bartender named either Ming or Jiao. Prop: wristwatch. Genre: mystery. Morris Yang (’18), Michael Nili (’20), Jasmine Liou (’20), and Freja Wild (‘19) had been toying with storylines, each new idea collapsing under the sheer amount of backstory needed to create a cohesive narrative. The students react with disbelief. “Mr. Barrus is trolling us,” Alexander Lin (’19) blurts. Mr. Openshaw offers his phone and dials Mr. Barrus. Anthony Hsu (’20) takes it. “Are you trolling?” he demands. “Okay, uh, thank you very much,” he says after a pause, seeming to catch himself. The room is abuzz with concerns about the logistics of choreographing fight scenes and ‘80s karate movie references. “Let’s put on some more appropriate music,” Claudia Sheng (’18) says, pausing the pop song they had been blaring. Alex complies. As strains of “Kung Fu Panda” fade in from the speakers, everyone bursts into laughter.

The Food Fair is full of shoppers at noon the next morning, when the film crew first steps cautiously in between crowded food stalls. Gathering in a deserted corner, they plan the trajectory for their chase scene like a battle plan. Their goal is to capture a brief shot, but it takes 20 minutes for them to set up. The scene is a logistical nightmare. As Mr. Barrus tries to shepherd shoppers to the sidelines before the first take, he frowns. “Without extras, isn’t this going to be unnatural?” he says.
“I don’t want to break anyone’s bones to get this shot,” says Morris.
In between takes, swarms of people again overtake the pathway. Shoppers are throwing real trash into the fake trash bin. “Stop that!” says Anthony. “This trash took a long time to make.” He hovers over the orange container protectively, propping a large black umbrella against the can as a makeshift lid.

15 minutes later, they have about three seconds of film. They grimace at some tiny flaws—“we’re still going way too fast!”—but the crowd is getting restless. Finally, Mr. Openshaw lifts his arms to allow them passage.’
At 6:00 p.m., the production crew relocates to the C Block dance studio to film a training montage. Experienced jiu-jitsu artist Joy Taw (‘20) had been cast as the trainer, and Matthew Chuang (‘21) as the fumbling newbie preparing to defeat his intimidating opponent, Rigel Anestos (‘18).
“And cut!” says Morris. This time, the culprit is a fallen microphone. They start over. Take 14, scene four, shot five.
For most team members, the vast majority of the time filming is spent waiting. The director waits  for the actors to rehearse their hand gestures, the cinematographer waits for the location sound recordist to finish setting up the audio equipment, and everyone else waits to be needed.  The whole team waits in complete stillness and silence for the microphone to pick up 10 seconds of ambient noise.
The editors, though, are constantly busy sorting finished footage. Anyone on set can be enlisted to run SD cards full of finished footage up to B block, where Claudia and Anthony sit in the dim editing room at two computer screens, working on two separate versions of the same scenes. Every couple hours, Anthony stops to slam a bludgeon-shaped pink balloon, which he had acquired at the Food Fair, on every available surface. Each blow brings the balloon nearer to complete deflation. “It’s for stress relief,” he says.
On a brief snack break, Claudia and Anthony scroll through photographs the production crew has texted them.
“They look dead down there,” says Claudia. The 48-hour deadline nears.

By Sunday morning, many of the team members have been awake for 30 hours straight, shooting fight scenes in the basement of the school at 4:00 a.m. Anthony is in control of one computer screen, surrounded by Alex, Claudia, and Mr. Barrus. Shawn Kao (‘20), the sound designer, stands just outside with Rigel, recording his grunts for use in the fight scenes.
“Less airy, more firm,” says Shawn, unsatisfied.
“But when you punch, you don’t go ‘uh’, you go ‘sss’,” says Rigel. “That’s what people think it is, but that’s not how it really is.”
In the middle of the floor, set designer Tingkuan Hsieh (‘20) lies asleep on an inflatable mat under the full glare of the fluorescent lights. Props and costumes are piled around him, and walkie talkies and empty soda cans litter various desks. Occasionally, someone passes food around the room. “God is real and he lives in Chili’s,” says Claudia, reaching for a box of french fries. She had nearly vomited twice earlier that morning after staying up all night fueled by nothing but soft drinks and pizza, but was recovering with the arrival of new takeout food.
At 3:00 p.m., Shawn takes a selfie with the whole group. “My mom needs a photo of me alive,” he explains.
Anthony says, “But you’re not alive. None of us are alive.”
“I’m surprised that we’re still functioning,” Shawn says.
They reach the 14th version of the film, and all of them are anxious after a routine Adobe Premiere crash. “It’s like computers know when your deadline is approaching and just start acting up,” says Mr. Barrus.

The number of both conscious and present students continues to dwindle, leaving only Anthony, Claudia, Alex, and Shawn with less than an hour left on the clock. They put together the final credits and the title slide, settle for perfunctory sound design, and manage a frenzy of color grading. When the film is finally finished, there is little fanfare. The remaining students depart, a weekend’s worth of homework on their minds. By the time Mr. Openshaw arrives at the competition center and turns in the team’s submission, most of them are curled up in taxis on the way home, asleep.