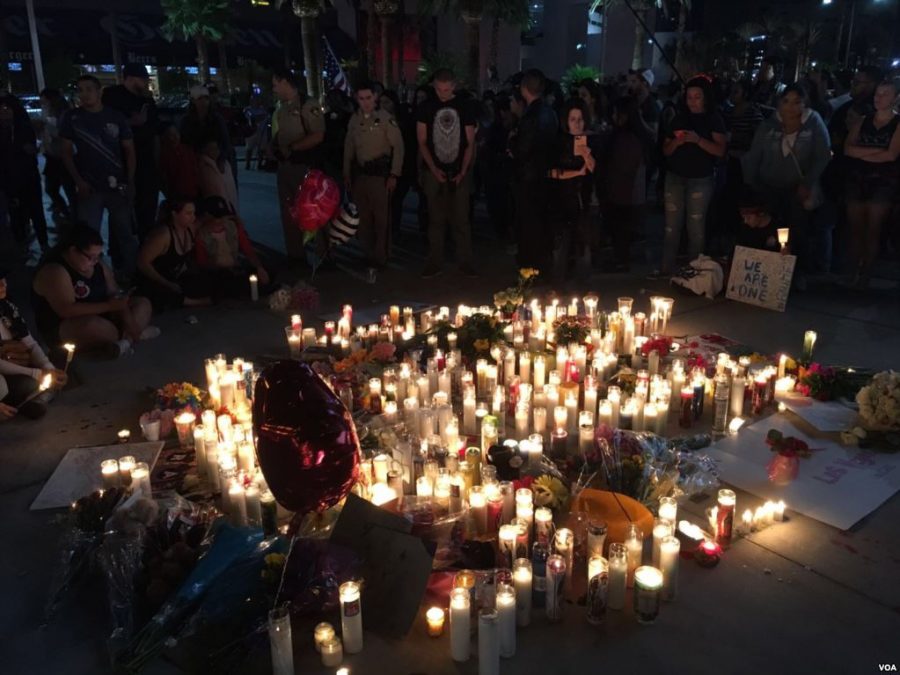 Taipei American School alumnus Ivan Yang (’17) was heading back to his dorm room at the University of Nevada, Las Vegas when he heard sirens. “I was in the car with my guys on the [Las Vegas] Strip just a few minutes away from Mandalay Bay,” he said. “We pulled over to the side and around 10 cop cars drove by, along with special forces and tanks. It was more intense than what you see in video games and movies.”

Yang’s drive back to campus crossed by West Russell Road and the South Las Vegas Boulevard.

The group drove back to campus. When they turned on the TV in their room, they realized they had been witness to one of the worst mass shootings in American history: a gunman had opened fire on a country music festival from his hotel room in the Mandalay Bay Casino and Resort. He had locked the door, pointed his gun out the window, looked down at the crowds dancing below, then opened fire. When the police found the man dead in the room, there was a stockpile of automatic weapons lined up on the floor. He had injured least 500 people, and killed 58.

As autumn leaves began to fall, leaving foliage draped around campus, classes resumed on Monday as if it had been a normal weekend.

Las Vegas residents, including others at Yang’s university, struggled with the fallout. Many students at the university had witnessed  the event, lost close friends and family, or been first responders on the scene. “The days after the shooting were odd,” said Professor Melissa Rorie, an instructor in UNLV’s Criminal Justice department. Everything seemed eerily normal. As autumn leaves began to fall, leaving foliage draped around campus, classes resumed on Monday as if it had been a normal weekend.
“No part of physical campus life had changed,” said Rorie. “But we were operating with an overwhelming sense of sadness and fear that blanketed everything as we tried to go about our lives.” The only physical marks of the shooting at UNLV were empty chairs at classes, serving as a chilling reminder of just how many students and loved ones had been hurt at the shooting.

Two months later, the pain lingers even as press coverage slowly dwindles. “Everyone who lives in Las Vegas was affected—Las Vegas feels like a small town sometimes to those of us who live here,” says Rorie. “We care about our neighbors, we care about our community, and I think this incident hurt us very deeply.”
For Yang, the event was not only a terrible tragedy, but a culture shock, as well. Having only graduated from school in Taiwan last year, Yang found it unnerving that such a tragic event occurred during a new stage of his life. “I’ve only been here for a little over a month, and one of the biggest shootings in U.S. history had happened only a few miles away from where I am every day,” he says. “As a U.S. citizen, I’ve always known about the safety issues with gun violence and people abusing their rights. But I was lucky to live where the thought of something was unimaginable. This is the first time it wasn’t a story on the news I was able to block out.”
In the United States, the right to bear arms is guaranteed as an essential component of the country’s Constitution. In sharp contrast with America’s policy, however, Taiwan’s arms laws are some of the toughest in the world. The government has long restricted civilian usage of gun possession, with few exceptions. These already-strict measures were tightened further in 2002, the Taiwanese government passed a Statute for Management of Self-Defense Firearms in order to further eliminate illegal usage. Now, according to a recent national report, fewer than five percent of civilians have access to guns: most of these individuals are aboriginal Taiwanese people who use guns for hunting.
TAS alumni close to the area fear and hope for the future. “This is a really sad thing, but because of so many shootings over the past couple of years, I feel numb, even insulated, from the violence,” says Cashua Wang (‘15), who lives in California. At least twelve people from her state had been injured in the Mandalay Bay shooting. “I’m just praying that I’ll never be in such a situation. These things are so out of our control.”
Another California resident, Melissa Cho (’17), said that people close to her had also been impacted. “One Chapman University student was shot and injured during the shooting,” she said. “Luckily, he’s safe, but I can’t believe that it was such a close call.”“Bullets rained down from the sky. No ‘good guy with a gun’ could possibly stop that.”

“Bullets rained down from the sky. No ‘good guy with a gun’ could possibly stop that.”

As American citizens, Wang and Cho hope that legislators will soon take action to prevent the event from happening again. “I keep wondering when any action on gun control will actually happen,” said Wang. “Bullets rained down from the sky. No ‘good guy with a gun’ could possibly stop that.”

However, the outpouring of support that Las Vegas received both internally and from elsewhere has bolstered affected members of the community. “Many stepped up to support others, donating food, water, blood, and goods,” says Yang. “Our school opened up a center for the evacuees who needed a place to stay.”
Wang agrees that the nation’s constructive actions have been instrumental for the nation’s healing process. “I’m trying not to let hopelessness seep in,” she says. “It’s important not to let terrorists—in my opinion, that’s what he is—‘win,’ which means continuing to live a life of love and hope despite others’ attempts to promote hate and anger.”
Even as the shooting exposed human ugliness, it also demonstrated strength from the countless people who worked to put the pieces back together. “I am proud of the people who transported people to the hospital, who gave up their shirts to help the wounded, who stood in line for hours to donate blood,” says Rorie. “I think it showed the world how much more there is to Vegas than the bright lights and entertainment we are known for. We care about this city and will continue to heal together.”