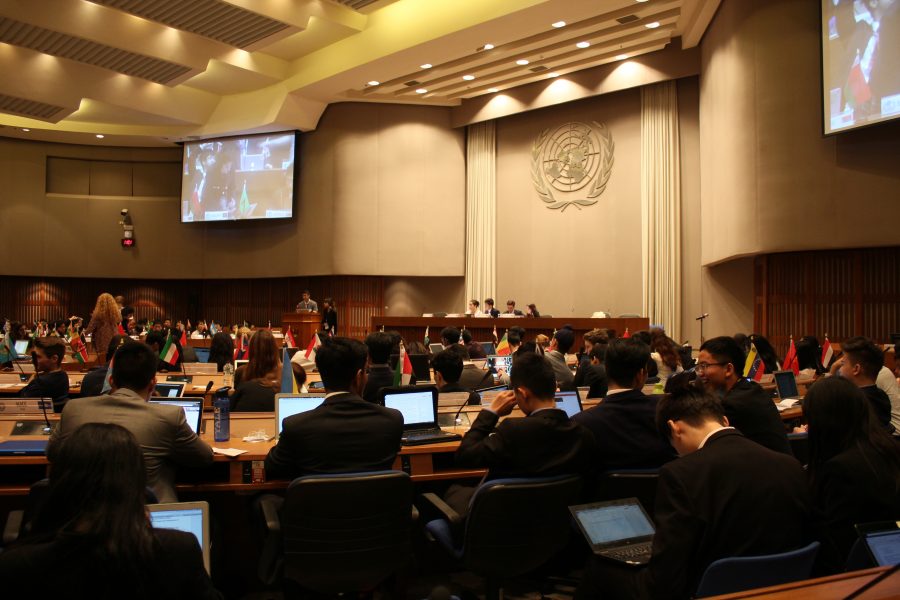 
From Nov. 3-5, TAS MUN students attended the MUN conference at Overseas Family School in Singapore. Mary Kim (‘18), a chair for the General Assembly Committee, believes that the conference was an eye-opening opportunity for the students who went. “There were kids as young as 10 years old with more experience in MUN than any other students, and there were also other kids stepping into their MUN career through MUNOFS,” she says.
Although many of the Taipei American School delegates were freshmen, the team did well at the conference.
Since many international schools in Asia attend the same events, Brian Lain (‘21) was able to reunite with at least five delegates from previous conferences, one of his favorite aspects of the trip. “One of them came up to me and said, ‘Brian, thanks for helping me at TASMUN 2016 with my amendment!’” he says. The moment helped Brian realize the impact of his dedication to to helping less confident students, a practice the TAS training program traditionally emphasizes.
IASAS MUN
Thailand
IASAS MUN this year was hosted by the International School of Bangkok from Nov. 9-11. With 10 different committees, including the Arab League, Historical Joint Crisis Committee, and the Security Council, the conference introduced political and social issues around the world to be discussed.

Janice Yang (‘18), head chair for Security Council, talked specifically about the Security Council topics, saying, “I became familiarized with topics such as the situation in Venezuela and South Sudan.” In addition to the topics, Janice says that the conference also introduced a different format to the usual debating style. She says, “We also pioneered a new way of making debates more entertaining, where delegates can call in ‘witnesses’ who take on a specific persona related to the topic and provide a first-person perspective to support a specific stance on the resolution.”


From Nov. 15-18, students attended the Berlin Model United Nations Conference hosted by the John F. Kennedy School Berlin. Andrew Xu (‘20) thought that BERMUN was a great learning experience for him. He says, “I learned at BERMUN to consider all the perspectives of a problem and to aim to address all its aspects, or at least if impossible, not just focus on a solution that will only achieve success for a small part.” He continues that the conference was also a great opportunity for him to connect with the juniors who went on the trip. He says, “The best part about BERMUN was getting in touch with juniors, the predominant grade of the team, all people I didn’t know quite well. But now I do.”
BERMUN also puts an emphasis on environmental friendliness. Cindy Li (‘20) says, “I feel like environment is one of their main focuses, since even though this year the conference theme is concerning women’s empowerment, they still are really aware of environmental preservation in each of the topics discussed.”