Inside the life of Ms. Yeh, school custodian 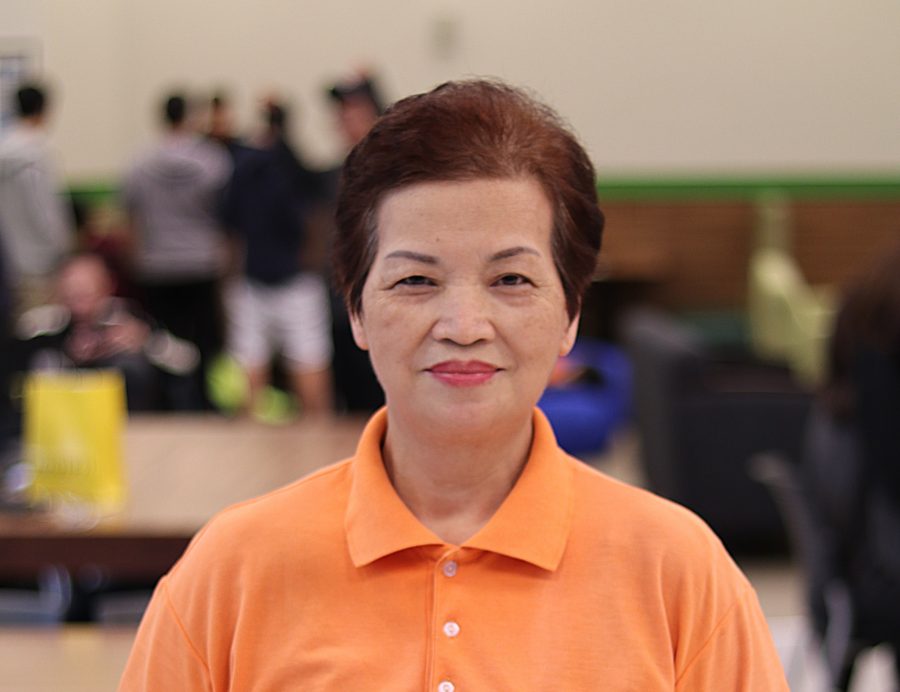 In the time that Ms. Yeh Xue-zhu has worked as a custodian at Taipei American School, she spent time collecting rubber bands—specifically, rubber bands that students threw away with their lunchboxes, or biandang. One by one, she tied the rubber bands that she collected together and formed a huge chain, until it was big enough to be strapped around the school trashcans. “This way, the plastic bags won’t fly away,” she says.
Ms. Yeh has been a part of the school custodial staff for almost two years. Every Monday to Saturday, she gets on a bus near Shipai MRT station and reaches school  at 7:00 a.m. She then spends the day cleaning the Legacy Commons and works until 6:00 p.m.
Because her 48-year-old son lives in Cambodia, she is often home alone, though he calls often to check up on her. He always asks, “Is work tiring?” and she answers, “No, not really,” reassuring him that she is taking good care of herself. Although she seldom has the opportunity to see her son and her grandchildren, working at a school keeps her busy. “The kids at school are very cute,” she says, “When I’m together with them I feel like I’m with my own grandkids, and I’m very happy.”
As a grandmother, she now reminisces about her own youth. When she was in middle school, Ms. Yeh was not a particularly studious child. She was always in the middle of her class, ranked 16th or 17th place out of just over 30 students. After graduating from middle school, that was it—she and her sister stayed at home while her two brothers continued high school. She says, “In that generation, it was boys who went to school. Boys would enter society, and girls stayed home to cook and clean.” When I asked her if she believed this was unfair, she says, “No. We didn’t think that way.” Yet, Ms. Yeh still wishes she had learned more as a child. She explains that she has an English name, but was never taught to pronounce it. She says, “Maybe if I learned more, I could understand the world better. Maybe I would be able to say my English name.”
Though she does not speak English, Ms. Yeh communicates easily  with other members of the TAS community. She jokingly refers to Upper School Dean of Students Dr. Daniel Long as “tall and handsome,” and was quite impressed that he speaks Mandarin fluently despite looking like a foreigner.
Dr. Long, the Honor Committee, and the Student Government have worked with Ms. Yeh to reduce cafeteria trash. “With their help, there has been a big change,” she says, smiling fondly and chuckling to herself. In particular, she recalls talking to a male student who helped her keep records of the cafeteria trash. She says, “He probably went to study in America, but if I see him one day, I want to thank him.”
Throughout the interview, Ms. Yeh told me a plethora of stories: conversations with her best friend, how she made an innovative rubber band hoop for school trash cans, karaoke on Sundays. She even described an encounter with a fish in her childhood that she had thought had supernatural powers. Out of curiosity, I asked her to remember a time in her life that she felt the happiest. I waited expectantly for her to tell me a story from her youth, with details as vivid as the ones she had used earlier. But she only said, “I am quite happy right now.”