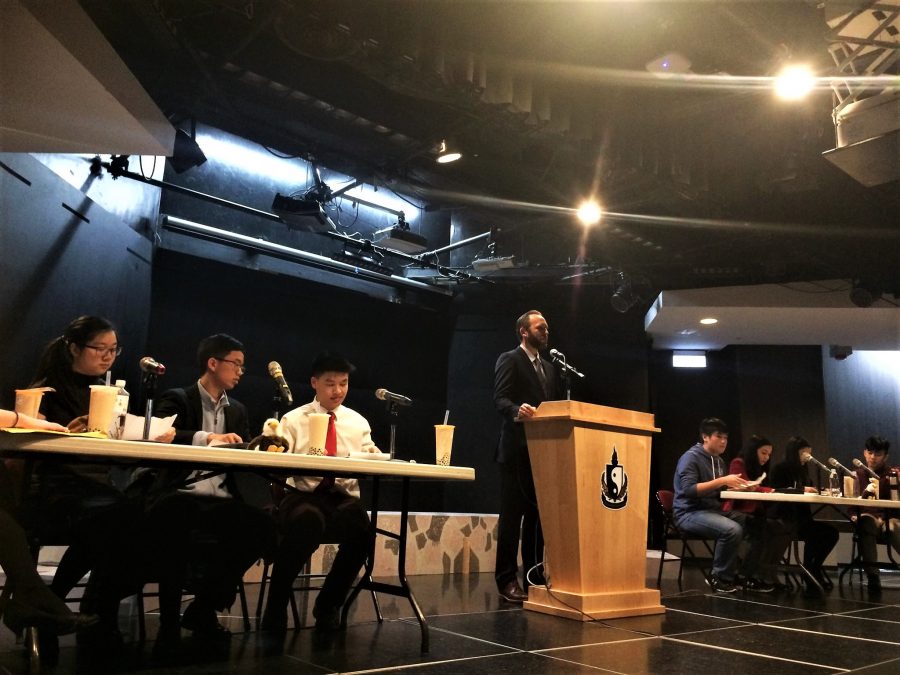 An audio snippet from the debate featuring USA Debate team member Leila Saklou.
This afternoon, members of the USA Debate team argued with and against Taipei American School varsity debaters in a World Schools Style debate in the Harmony Theater. 100 people from around Taiwan, including students from Taichung, Tainan, and Hsinchu, registered to attend the debate.
The resolution up for debate was “This House believes the government has the right to censor media that may be harmful to the population.” Ranen Miao, a junior from New Jersey, and Ella Michaels, a senior from California, debated with Theodora Tang (’18) and Eliot Wang (’18) in favor of the resolution. They went up against Emily Grantham and Leila Saklou, two juniors from Texas, working with Kurt Peng (’18) and Josh Wah (’20), who opposed the resolution.
The affirmative framed their debate under the social responsibility for governments to protect individuals from harmful speech, while the negative claimed that the subjective nature of censorship would potentially lead to an abuse of power.
Throughout the debate, the affirmative emphasized the role of censorship in promoting peaceful communities in nations like Thailand, where criticism of royalty is banned. However, the negative countered the argument with a claim that restriction of hate speech would “blindfold the public” to the vitriol of certain demographics. “Just because we don’t advocate for censorship doesn’t mean we believe in violence,” Emily said.
The debate was followed by a panel discussion between Dr. Adam Nelson, chair of the political sciences department at TAS; Colorado senior Piper Doyle; and Aaron and Cynthia Timmons, coaches for the USA debate team. The four individuals discussed the value of debate, gave advice to viewers about how to improve speaking skills, and emphasized the value of respectful debate in cultivating globally-minded and empathetic individuals. “You can talk about issues that are controversial, and those positions will be challenged by the best of the best when you’re debating,” said Aaron Timmons. “But the end of the day, debate embraces the humanity within the person on the other end of the room.”