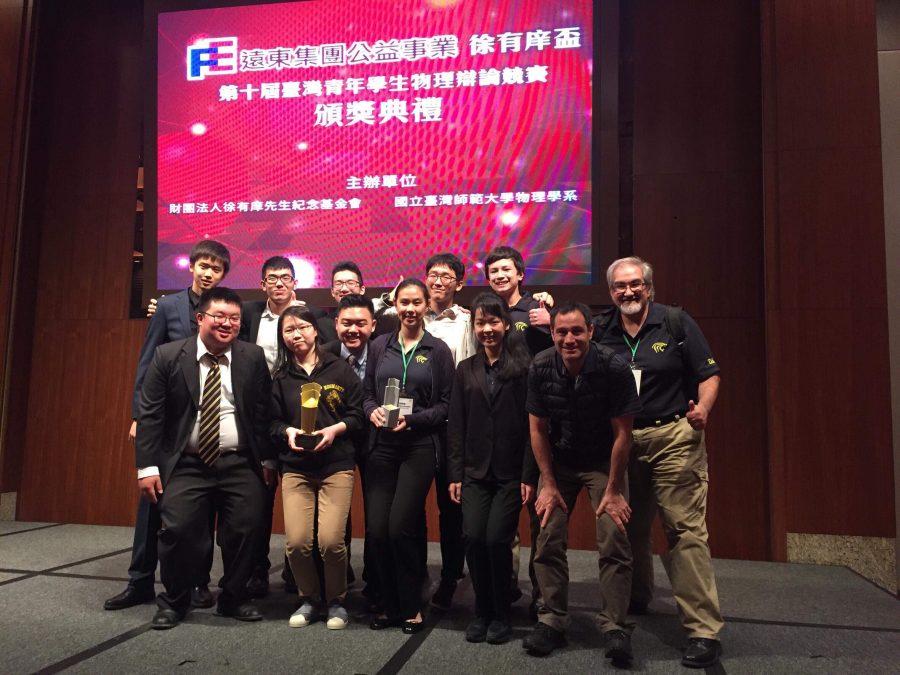 From March 16-19, 10 Taipei American School students attended the Taiwan Young-Student Physicists’ Tournament, a competition where teams of five present and debate their research on a set of 12 predetermined unsolved physics problems.
The All-Niters team, consisting of team captain and TYPT club co-president Tim Ho (‘19), club co-president David Wang (‘19), Alvin Ling (‘19), Shin-Yi Chu (‘19), and Claire Wang (‘19), won first place. The No-Niters team, including Rem Yang (‘19), Michael Lee (‘19), Kelsey Wang (‘20), Karen Wang (‘20), and Jack Bruce (‘21), won a silver medal, placing seventh. Three students—David, Alvin, and Rem—also became candidates for the Taiwan’s International Young Physicists’ Tournament team and were invited to its training camp in April.
The TYPT club, with the assistance of the Research in Physics class, began preparing for the competition in September. For each of the 12 research questions, the team went through a three-stage process: theory, modelling, and experimentation. “Theory is basically coming up with the important physics concepts and some ideas as to how to use those concepts in a way that can explain the question given,” says David. “Modeling takes that theory and applies the math to it. Experimentation then tests the theory by collecting data at which point we can finally compare the data to the model of our theory and justify it.”
The research is almost completely self-guided, meaning that creativity is required to solve the problem. As a result, teams from across Taiwan come up with a broad range of conclusions. “The fact that you get to listen and talk to different people about their interpretations of different physics phenomenons is cool by itself,” says Tim. “Some teams say changing density is the most important factor in explaining a phenomenon, others say buoyant force.”
At the event, each student must present their own research, challenge other teams’ work, and summarize the pros and cons of the arguments in debates they are not participating in. Kelsey, a first-time competitor, says, “[My favorite part of TYPT is] when the judges nod along to your answer, or when the opponent is forced to concede that you are right.”
But the team members also had fun outside of the debates. “One of our team members gave a very interesting name to a function,” says Kelsey. “For the sake of his dignity and consideration of his future reputation I will not disclose the name of the function, but it was very…interesting and creative.”
In the future, the TAS TYPT team looks forward to growing the club and enjoying the eureka moments when, as Kelsey says, “it all makes sense.” For her, though she is proud of the team’s success, what makes TYPT a rewarding experience is the team’s progress. “I feel that we all improved as we did more debates with each day, and that’s what’s more important than getting gold, silver, or bronze,” she says.