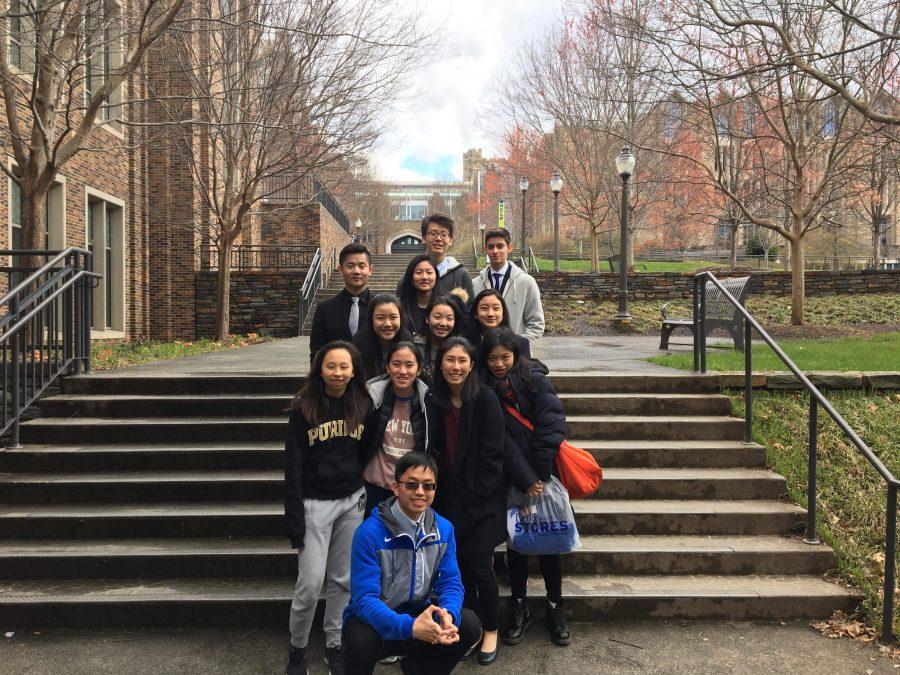 Six Taipei American School teams participated in the Duke High School Moot Court Tournament, which was held from March 24-25 on the campus of Duke University in Durham, North Carolina. In TAS’ second year competing in the tournament, three teams progressed to the elimination rounds, with Emily Hsu (‘20) and Cindy Li (‘20) advancing the furthest. The sophomore duo, who also represented the school in 2017, reached the Elite Eight, or quarterfinals, before being eliminated.
“I almost cried when they announced the results,” says Cindy. “I still can’t believe that we actually made the final eight, and I am grateful to my amazing team and coaches for the entire trip.” Her partner, Emily, says, “I feel really accomplished seeing how much we improved since last year…getting into quarterfinals this year was beyond my expectations.”
Eliot Wang (‘18) and Darren Fang (‘19) were eliminated one round earlier in the Sweet 16, while juniors Charlotte Chou (‘19) and Iris Huang (‘19) were able to reach the Round of 32. Jessica Chen (‘20), Kimberly Hwang (‘20), Angela Wang (‘20), Dokyong Ryoo (‘21), Henri Reyes (‘21), and Eming Shyu (‘21) also traveled to North Carolina but did not advance to the elimination rounds. All six teams were coached by TAS political science teacher Dr. Adam Nelson.
Regarding the teams’ preparation and coaching for the event, Eliot says, “Starting in March, after we have written our outline for our oral arguments, we had individual team practices with Dr Nelson, who acted as the role of a judge and asked questions about our case. It was very effective given that Dr Nelson’s expertise in moot court, debate and law in general allowed us to understand what areas we still needed improvement on.”
According to Eliot, the TAS teams faced strong competition throughout the tournament. He says, “In the elimination rounds, most teams were very knowledgeable of the cases and it was a great experience competing with exceptional public speakers.” All competitors debated topics related to territorial sovereignty and intellectual property, drawing evidence from United States Supreme Court and International Court of Justice rulings. Cases the competitors studied included the ICJ ruling in France v. United Kingdom regarding territorial claims over islets in the English Channel, and the Supreme Court ruling Egbert v. Lippmann, a landmark case in patent law.
“We got the amazing opportunity to really delve into these challenging issues,” says Eliot’s partner Darren, a second-year participant. “I think everyone who went on the trip should be proud of themselves; the main objectives were to have fun and learn from the experience, and I think I can speak for the group when I say that we accomplished both.”