"My strange life is serving to illuminate other women": an interview with Sandra Cisneros 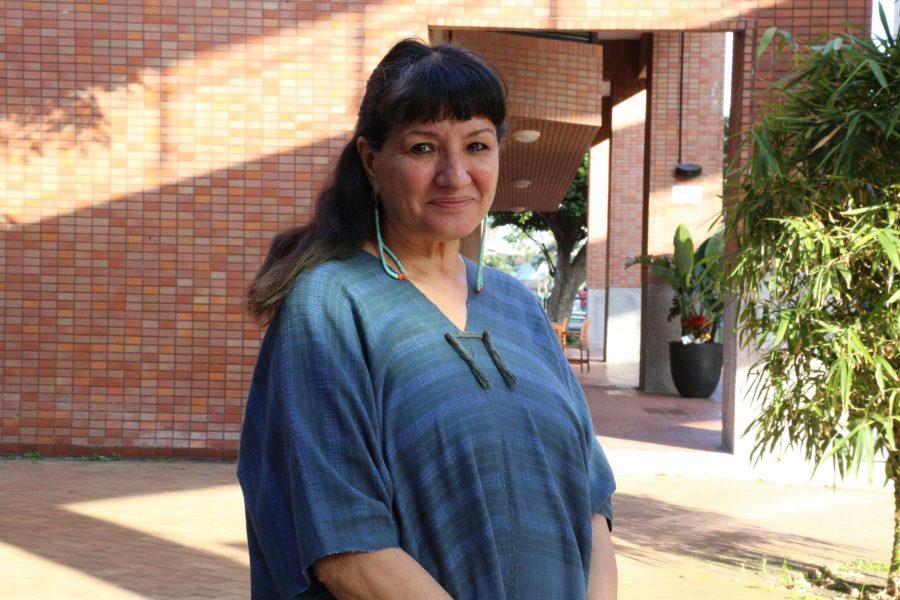 Sandra Cisneros, author of The House on Mango Street and other renowned books, visited Taipei American School from March 19-23. The Blue & Gold had the opportunity to speak to her during her visit about her books, growing up, and activism.

The prospect of interviewing someone who’s older—not necessarily also famous or an idol like you are—but older—is sometimes stressful for me, because at a certain age it seems like people develop a cohesive mindset that they repeat over and over again. If someone has it all figured out what can I possibly ask them that they haven’t said? And how do I ask something that they haven’t already told the world?
No, you never say it all, because you change your mind, and you relearn. Hopefully we never get stagnant. In my mind I’m eleven, and I’m not sixty three or famous. I feel eleven, and I feel like I’m still growing, I feel very childlike. I feel like I have a lot to learn. I hope I can encourage that growth by keeping myself open, not emulsifying.
What do you find has changed about yourself, and what’s stayed the same?
I still say stupid things, and I still think I’m invisible. You know, when I was a child there was a part of me that felt invisible, like I was just this little ball of light that would stare at things and people would stare back. I’d jump, I’d say, “Oh, I’m not invisible!” I feel, in some sense, that I’ve returned to being invisible because women go from being invisible as children: one, because they’re children, and two because they’re female; then to attracting too much attention. And then it gets worse in your twenties. Then as you get older men lose interest in you and you go back to being invisible, which is wonderful. Because you want to be a spy as a writer, you want to be invisible. Now I’m getting older—and I’m not a mother—in patriarchal years, I’m out the pasture. And the wonderful thing is that I can enter and leave a room without causing disruption, and it makes me feel like a girl again, to be a girl again. Some part of me goes “Oh, they don’t look at me anymore!” but most of me is so relieved. Thank god! Leave me alone! I also like how as I get older I’m less concerned with how they—men—think. I’m less concerned with what women think, too, and more concerned with how I think. You have to learn how to put what you think first.
And, you know, I’ve never been sixty-three. Maybe I have been in past lives, but I don’t remember it. So I’m trying—and I’m being reborn in every phase. Really paying attention. The only thing I have to remember is to give myself the freedom to think the unthinkable. I want to shock people, I want to explore with myself. That’s exciting for me. I see that I have an rather unusual way of thinking and now I understand why it was so difficult for me as a child. I realize that my strange life is serving to illuminate other women, people who want to invent their own path.

I remember actually that you wrote as a tribute to Eduardo Galeano that he “wrote like a woman.” What role does writing like a woman mean to you?
I mean you take risks, and you don’t hold back, and you don’t lie, and you love fully, and you love with generosity and passion. And you do it with language. Men are afraid of language, so when I say that about a man that’s a high compliment. Men are stingy with words and if someone is precise and generous with language that makes me say they write like women.

How do you feel about your poetry, and your writing in general, at this stage of your life?
I’m very unhappy with my poems right now. I feel like I’m going into some stage when I don’t want to hear poems written in the first person by me. I feel a little frustrated because I feel like I want to disappear and listen to what other people are saying. I feel like I need some time to be even braver about the things I’m saying.

You mentioned in your memoir that you wanted to abstain from publishing, like Emily Dickinson did, after your first collection.
Yes! I wanted to throw them under the bed! And I feel like it’s time to do that again. It’s more important for me to write them than to publish them right now. The times we’re living in are such shocking inhumane times. How could I be writing about my own personal world when I should be ceding the page to other people? I don’t invalidate my own poetry, but I just feel this urgency to be of service to others. And my voice isn’t really important right now. You know what I mean?

What makes poetry so fundamentally different and personal compared to prose, for you?
You know, for me, when I don’t have words, and when I feel things roiling inside me, and when I have to invent the words for what I feel, that to me is poetry. On the other hand, when I’m writing prose I know what my message is, and I know I’ve written something that captivates people. But poetry is so diffused and out of reach. It’s an emotion without language and I have to invent the language for it. It requires a type of inner silence the prose doesn’t for me. Prose comes to me inherently when I’m in public. When I’m talking to you, or to students, or when I get an idea for an essay. But poetry is so private! I love the title of June Jordan’s Things I Do In the Dark. I love the idea of poetry being something we’re embarrassed about. That it’s the one room in the house of the spirit that’s taboo. Where I can say anything, but it’s in the dark even when I don’t know it. So much self-discipline and so much more than anything else. I don’t know how my poetry’s going to change but it has to change in this place where I’m shedding my skin. I love writing across these borders of genre. So right now I’m in that search.