Boys and girls golf teams continue a streak of gold 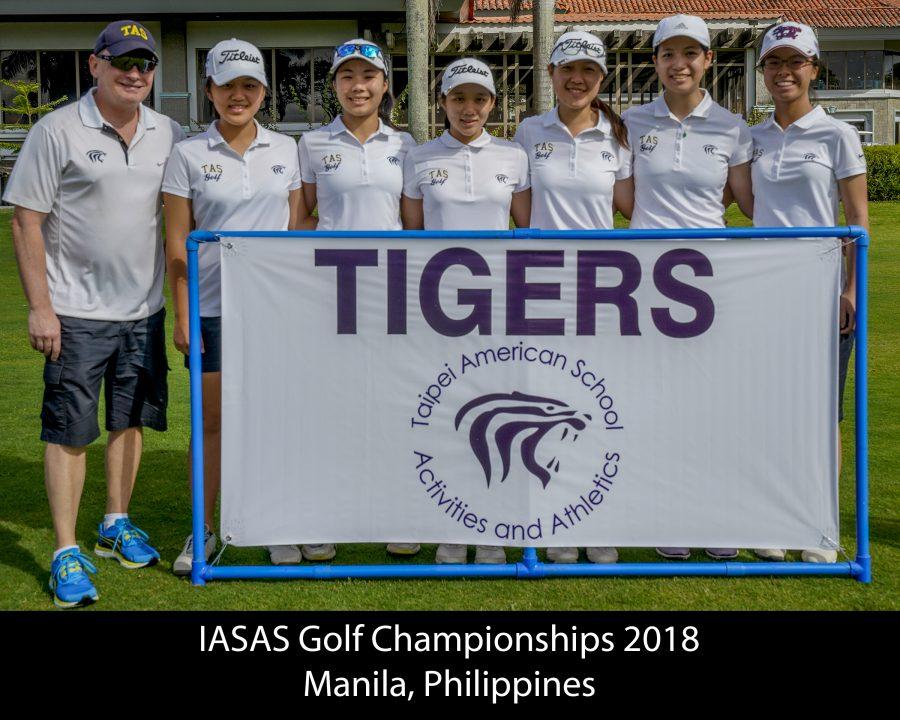 The Taipei American School girls and boys golf team both won first place at the 2018 Interscholastic Association of Southeast Asian Schools competition, hosted at International School Manila from April 12-14. This is the fourth consecutive gold for the girls, and the third consecutive gold for the boys.
In the first two days of the tournament, schools are ranked by adding the top four scores from the six players on each team. The lower the score, the higher the ranking. On the third day, each individual plays against another athlete for points, with matches being determined by the previous days’ rankings. The top two schools play each other to determine the gold medalist, the third and fourth schools battle for bronze, and so on.

In addition to their first place finish, the girls also broke the TAS record and IASAS record for the lowest four combined scores. “We are very proud for the record that we set for IASAS golf and the fact that we won four times consecutively, given that IASAS golf has only existed for six years,” says girls co-captain Chansie Yang (‘18).
For the individual rankings, Chansie placed first for the second year in a row with a score of 147, Shana Yang (‘20) placed fifth with 165 points, girls co-captain Caroline Chou (‘19) placed ninth with a score of 180, Christy Cheung (‘18) placed 11th with a score of 188, Chloe Wang (‘19) placed 18th with a score of 204, and Emily Lo (‘19) placed 23rd with 209 points. “We all played our lowest score this whole season,” says Caroline.
On the boys team, co-captain Eugene Kao (‘18) tied for second place with co-captain Ryan Kao (‘19), each achieving a score of 150 points. Eugene also broke the IASAS record for the lowest individual score for one day. Isaac Kuo (‘19) placed 14th with 168 points, Scott Lin (‘18) placed 17th with a score of 171, George Lee (‘19) placed 20th with a score of 176, and Kevin Lu (‘19) placed 29th with a score of 190 points.
While the girls team immediately rocketed to first place. “We were the best team from day one,” says Caroline. “We woke up an hour earlier than the rest of iasas to get some time on the putting green on the first day.” Chansie adds, “The other teams were couldn’t even make it to breakfast on time.”
Meanwhile, the boys team got off to a rough start, finishing third after the first day. However, the team quickly bounced back. “We realized that we had hit rock bottom, while the other schools had overperformed,” says Eugene. “On the third day, we were barely able to edge out the win, but we had all completed one of the greatest comebacks in TAS history.”

Both the boys and girls teams worked hard for their gold medals, with a training process focusing on individual practice on Saturdays. “The players on the team trained hard for tryouts as well as the tournament. Some of us stayed up until midnight practicing,” says Ryan.
The girls team captains likewise emphasize the importance of individual self-motivation and control.  “Golf prepares you for life. Five to six hours of unpredictable weather—from 10 degrees Celsius to 36 degrees Celsius—to the occasional bad shots, really hone your discipline, mentality and patience,” says Caroline. “In the end, the strongest golfer is the most consistent, positive, and mentally strong one.”
Delete Image
Align Left
Align Center
Align Right
Align Left
Align Center
Delete Heading