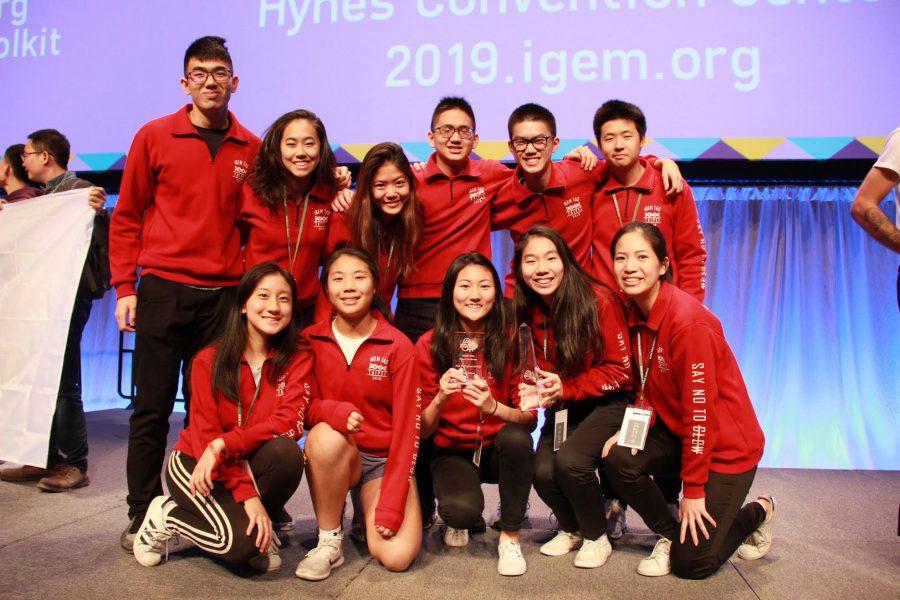 From Oct. 25-28, Taipei American School students attended the International Genetically Engineered Machine Competition hosted by the Massachusetts Institute of Technology in Boston. iGEM is a premier synthetic biology competition for high school and university students, where teams use biological parts to synthetically design a system and operate them in living cells. The TAS team won the Best Entrepreneurship Award, and was also nominated for seven other awards.
This year, the team’s project aimed to reduce the carcinogenic effects of ALDH2 deficiency. In other words, a probiotic and purified protein form of ALDH2 is produced as a recombinant to decrease levels of acetaldehyde, which is what makes you turn red after the consumption of alcohol.
This team has planned the project since November 2017, and throughout June the team stayed in Taipei to perform lab experiments. Despite their success at the competition this year, co-project head Catherine Chang (‘19) describes the obstacles faced when the seniors from the Class of 2018 graduated.
“We were left troubleshooting results. We literally took the longest time trying to lyse and conduct a functional test on our enzymes,” she said. Although that was not the right approach, they ended up learning about lysing and enzyme purification.
After cloning and testing 11 different DNA constructs, the team found success and decided to test the carcinogenic effects of ALDH2 efficiency through a probiotic candy. Patients were given this candy, which breaks down toxic acetaldehyde. “We are very proud of ourselves entering this competition; 11 DNA constructs is the most TAS has ever made. But the grand prize winner had 55 DNA parts which is insane for a high school team,” said Catherine.
As last year’s Grand Prize winners, biological engineers from different schools had high expectations for the Taipei Team. “Our presentation was full house. All the seats were taken and there were even people standing in the back to listen,” said Catherine.  Annabel Chang (‘20) also agrees with the success of this year’s iGEM team. “I believe that TAS’ project was fantastic. They put a lot of work into making it the best they can, and I think they deserved to win,” she said.
Next year’s iGEM team shows as much promise as the previous years, upholding TAS’s reputation in the STEM field. “We have plans to collaborate with the robotics department and to change up our ideas. I hope our TAS team maintains and even improves our standards to remind the judges of our excellence,” Annabel said.