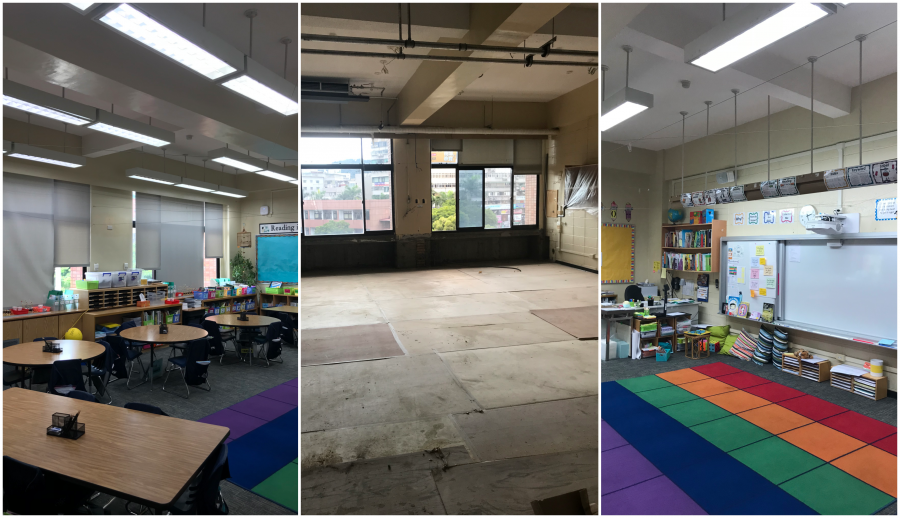 Taipei American School conducted a variety of renovation projects led by CEO Mr. Larry Kraut and Director of Facilities Mr. Michael Dodge that ran from the beginning of June to the beginning of August.
“Some projects were based on regulatory changes, and some were based on things wearing out,” Mr. Kraut said. Categorizing projects was key to making the whole process easier for the renovation team.
By the time the renovation process started, furniture was already removed, and protection was applied to hallways specifically onto areas that needed to be improved. The large-scale renovation ran for 16 hours per day and employed 70 people.
Since bathrooms did not uphold TAS’ sanitary standards, they had to be completely redone. “It was not necessarily because they were not functional, but [the bathrooms were growing] quite old and becoming hard to clean and maintain,” Mr. Kraut said.
Classroom renovations involved modifying lighting, acoustics, and air conditioning. Fluorescent lighting was switched to LED lights. “Some people get fewer headaches from LED lights,” Mr. Kraut
said.
Originally, the air conditioning units were placed right alongside the window. Removing the units increased a significant portion of the classroom, so the air conditioning was added to the drop ceiling. This allowed for better air conditioning and a bigger usable space, an unexpected perk of the renovation.
When the school’s structure is examined closely in terms of each block and building, there is drastic difference between the quality of D Block classrooms and classrooms throughout the rest of the school. So with the hope of bringing every classroom to a new standard, this summer’s renovation was the start of a four-year project aimed at bringing every classroom brought up to a new standard.
“Our goal is to get them at least to the D Block level, so we have that uniformity throughout the school and the learning environment for all students is the same,” Mr. Kraut said.