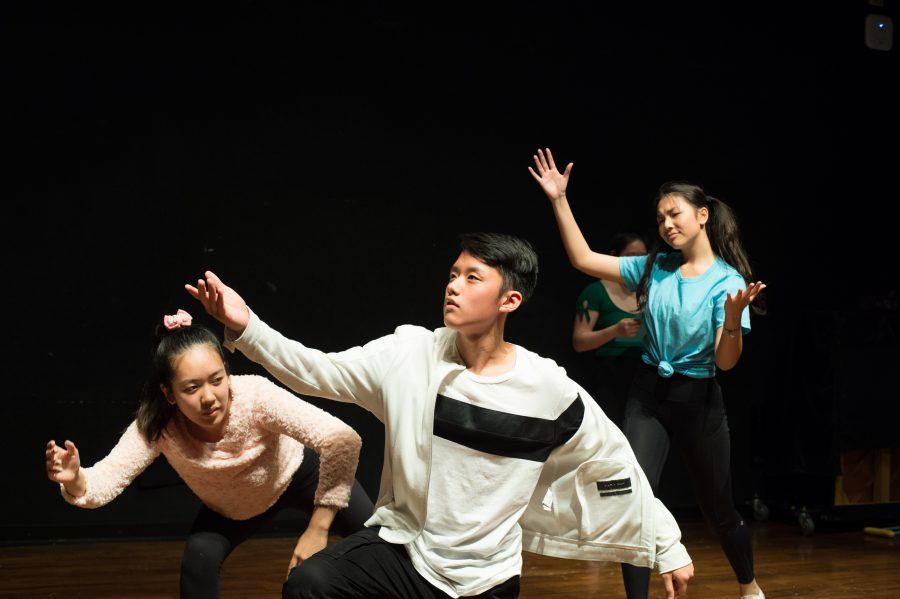 On Dec. 7, the Thespian Honor Society, with the assistance of Dance Honor Society, hosted the annual Theatersports competition in the Black Box Theater. The event consisted of five impromptu acting challenges, with an overall theme of video games.
Four teacher judges scored the teams at the end of each round and eliminated the team with the lowest point total. Six student teams of four participated, along with a teacher team that performed between rounds. Leo Horwitz (‘21), Mimmi Soderberg (‘21), PJ Anderson Salo (‘20) and Owen Reynolds (‘21), members of the team Frustrated Pigeons Not To Be Confused With Angry Birds, won first place.
The first challenge, called Scenes From a Hat, gave each team 30 seconds to prepare for a one-minute performance of a  scenario, such as “You are at a zoo when the snakes start talking” and “You are on a mission to save your father who has been kidnapped by dwarves.”
Next, in Props From a Table, teams were similarly allotted 30 seconds to prepare for a one-minute scene, but had to choose a prop improvise a new function for. One team turned a beach volleyball into a coconut, while another deployed a crutch as a shopping cart. In Lines from a Hat, each team member blindly picked a line and put it in their pockets, then took turns saying the line at intervals during their performance. They had to quickly adapt their scene to suit the randomly chosen line. Then, Interpretive Literature required teams to read out a poem and perform movements or dances to accompany the monologue. The last challenge, Officer Scene Recreation, involved duplicating a scene performed by THS and DHS officers at normal speed, half the speed, then twice the speed.
Armed with sarcastic quips and dramatic voices, the Theatersports performers brought their characters alive and honed their improvisation skills. “Improv puts you and your team in such a vulnerable position up on stage,” Leo said. “You don’t know what’s coming, nobody knows what’s coming. But at the same time, having a team of friends that is helping me figure all of this out as we go is really fun.”