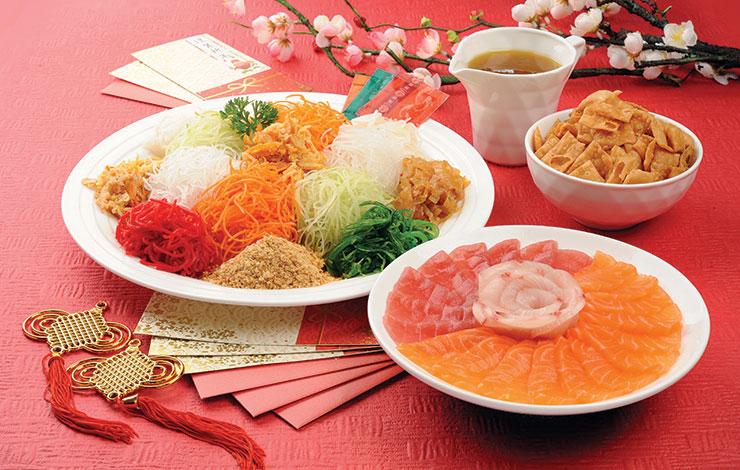 One of the most unique dishes Singapore boasts during Chinese New Year is “yu sheng.” Photo courtesy of causewaybay.com.

“Huat ah” is a phrase you will typically hear in Singapore during Chinese New Year, and it is commonly used to welcome prosperity. While a Singaporean Chinese New Year has elements similar to a traditional Chinese New Year, from the emphasis on family reunions to carrying out traditions to usher in prosperity and good luck, there are some differences in how it is celebrated.
In Taiwan, Chinese New Year is a public holiday that lasts from Feb. 4 to 8. Singapore only has two days—the first two days of Chinese New Year.
On the first day of Chinese New Year, Stephanie Loo (‘19) has to give her parents two mandarin oranges ceremoniously and say a few auspicious phrases wishing them good health, a long life and so on. “Then they will give [me and my brother] red packets, which are usually $50 SGD, and tell us to ???? (work hard academically) and other typical Asian stuff,” Stephanie said.
One of the most unique dishes Singapore boasts during Chinese New Year is “yu sheng.” Yu Sheng or Lo Hei means ‘tossing up good fortune’ in Cantonese. Yu sheng (??) is a raw fish salad composed of many toppings including shredded carrots and radishes, Chinese parsley, pomelo, peanuts, sesame seeds, five spice powder, crackers, plum sauce and the highlight, salmon or tuna sashimi.
“My mum has a tradition of making the yu sheng every year,” Stephanie said. She explained that her mom prepares the base, shredded carrots and radish, and then purchases the other ingredients like crackers. Relatives help out with the making of the dish by bringing some ingredients as well, adding to the collaborative spirit of the festivities.
Then, everyone would gather round the table to “lo hei”, which means to mix up the ingredients and toss the yu sheng as high into the air as possible. Certain auspicious phrases are recited when mixing the yu sheng.
For instance, when putting in the raw fish, you would say “????” (Nian Nian You Yu) which symbolizes abundance or ‘excess’ through the new year. When putting in the white radish, you would say “????” which means promotion at work or climbing to higher heights in your pursuits.
Stephanie’s family also puts their own twist on the lo hei tradition. “They would say ‘???’ which means ‘let’s hope we win the lottery’ and that the children would score A stars [on their exams],” she said.
And yusheng is only the appetizer accompanying the feast. During potlucks, less conventional Chinese New Year dishes like curry chicken would make its appearance, fusing the local Singaporean palette with the traditional Chinese dishes.
Dressing up in red, or other vibrant auspicious colors, to visit relatives is also an important part of the festivities. Damien Lui (‘19) said, “My mum would make me wear red shirts with whatever the zodiac was that year.” Stephanie’s family allows her to wear any color, except for dark colors seen as inauspicious, with only one condition: they have to be brand new clothing. “My mum will always make us shop for new clothes before Chinese New Year,” she said.
In addition to family gatherings, all Singaporean schools host Chinese New Year celebrations prior to the public holiday, too. The celebration lasts half a day of school, and students are allowed to wear red clothing or traditional clothing (such as cheongsam or changshan) instead of their usual school uniforms.
Damien said that his school always held lion dance performances. Meanwhile, Stephanie’s school had its own unique tradition of a schoolwide Chinese calligraphy activity. “Every class would get a few sheets of large red calligraphy paper and the whole school would be in the quadrangle writing Chinese calligraphy,” she said. She added that sometimes students would give mandarin oranges to their teachers too.
Although there are many unique traditions in a Singaporean Chinese New Year, Singaporean Chinese celebrate Chinese New Year for the same reason all Chinese do: reconnecting with family. “The most significant part about CNY for me is that I only get to see family during that period, because we have such a large family, some of us only see each other once a year for special occasions,” Damien said.