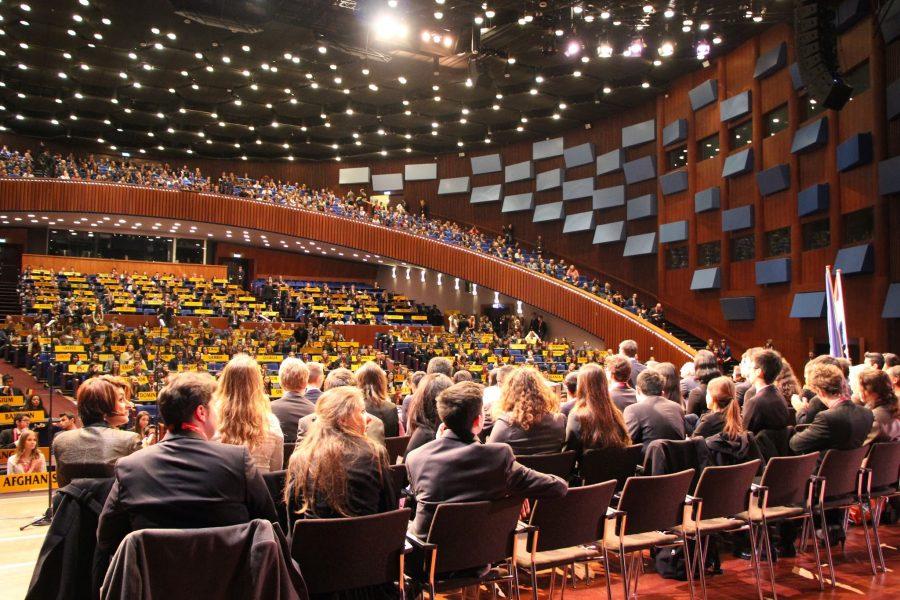 From Jan. 27 to Feb. 1, Taipei American School sent 18 students to attend The Hague International Model United Nations conference, or THIMUN-Hague. Taking place at the World Forum Convention in The Hague, the conference had over 3200 students attend from around the world. Travelling with their coach, Dr. Soublet, the students had one of the most successful THIMUN-Hague conferences in TAS history.
“This was the largest delegation we have sent to The Hague ever, meaning that the THIMUN board will now come to see TAS as an extremely capable team” said Dhirpal Shah (’20), one of the students attending the conference. In addition to the team’s size, various members of the team received multiple awards in the best delegate and best speaker category and many more students main-submitted a resolution to be debated.
Dhirpal was unanimously voted best delegate, an award that is given to the most diplomatic and successful speaker at the conference, by his peers. In addition to his individual accomplishment, Dhirpal also represented a coalition of students who unanimously passed a resolution in a 200-person committee.
The team also enjoyed memorable moments in their committee debates. While representing Côte d’Ivoire, the delegates debated issues ranging from child violence to the rights of Afghan women. During these debates, delegates often encountered personal interactions that would stay with them long after the conference was over. “I met a delegate who told me about how she was born in Côte d’Ivoire and how she was raised there. She said she thought that I was doing a really good job representing her country and I was really awestruck” said Yan Ying Mor (’20), another student at the conference.
“After my conversation with her, I sat back and realized that this sort of thing was why I joined MUN in the first place: to broaden my horizons, meet new people, understand new perspectives, and just to become a more globally aware citizen” said Yan Ying. It is interactions such as this that came to define their experience at the conference for many delegates.
“The most important thing at the conference was not main-submitting a resolution or even winning awards, but making friends and enjoying the overall experience” said Dhirpal.