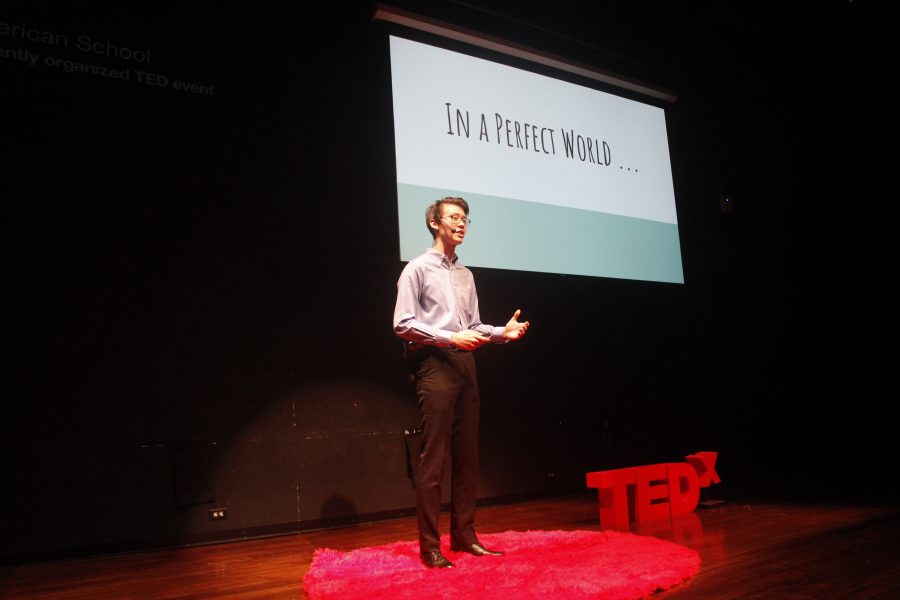 On March 9, six members of the Taipei American School community gave speeches at the fifth annual TEDx conference in the Black Box Theater, where they shared their beliefs and ideas on what could make a world become “perfect.”
Nearly 100 students, teachers and parents, who registered free tickets online, attended the conference.
The speakers were Samik P. (’20), Justin Z. (’19), Enoch T. (’22), Clarence L. (’22), Eming S. (’21) and Maggie L. (’19). They talked about the theme, “In a ‘Perfect’ World.”


The event was hosted by emcee Keanne C. (’19) and curated by co-presidents of the TEDxTaipei American School club Alexander L. (’19) and Vanessa S. (’19).
Samik took the floor to discuss the importance of cultural diversity in primary school education. As a first grader, Samik donned a kurta, a traditional Indian robe, on Culture Day, and shared Indian cuisine with his peers, who introduced him to their traditions. “It was the first time I ever saw someone wear different articles of clothing and eating foods different from my own,” he said.
“Children should be taught to value cultural diversity and respect the difference between another culture and his or her own,” Samik said.
Justin used mathematical formulas to simulate a matchmaking of Upper School students based on top partner quality.
“Mathematically modeling love would be as easy as one plus one. But unfortunately, it is not,” he said. “But these ideas of independence and reciprocity in a relationship are ideas from mathematics that I hope all of you consider.”
Risk and reward have an inextricable bond, Clarence and Enoch said. Goals cannot be reached without cost and purpose. They, for instance, took the risk to become lifelong friends. “Thank you, our perfectly imperfect world,” they said.

Eming recalled his competitive studying at his former school in Shanghai. After arriving at TAS three years ago, however, Eming was shocked that extracurricular activities were weighed more than academics.
He thought only grades reflected being a “good” student. But joining Model United Nations has taken him out of the rein, and since become his passion.
“We should never be defined, categorized, limited or judged by the society, by our peers, or even by yourselves,” Eming said.
Maggie was surprised after linking anemia among children in rural China and their starch diet. While parents were working hard in the city, caregivers and doctors, lacking medical knowledge, assumed that the children were healthy, when in fact, they were not.

“This is what we call the invisible problem,” Maggie said, citing her nutritional research. “But we can at least alleviate the problem by working together to raise awareness for this issue.”
During the break after the first series, attendees were offered drinks and refreshments. The TEDx staff held photo sessions. Visitors wrote global issues and solutions, and drew illustrations of the worlds they envisioned, on wallpaper. They also placed dot stickers on places where they went to and aspire to go to on a world map.
on

Taipei American School has hosted a TEDx event every year since 2014. TEDx is a nonprofit, independent program meant to stimulate conversations, not assert individual arguments.

“Our goal is to have everyone come and share their own viewpoints and have a meaningful discussion,” Alexander said. “But, of course, everyone has their own opinions and, we are not trying to convince any one particular kind of view.”