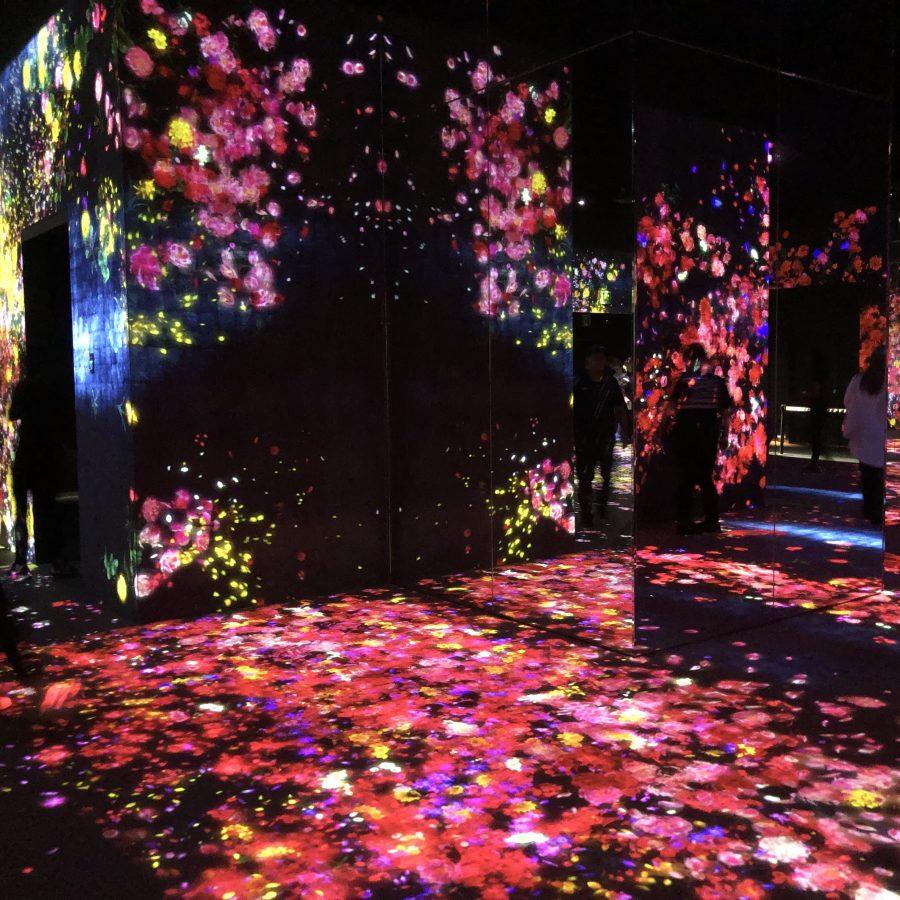 teamLab Borderless is a museum that integrates modern art, science, design, and technology. Located in Tokyo, Japan, since 2001, it has been influenced by Japanese culture and has further blended traditions with modern technologies. The goal of teamLab Borderless is to relate humans and nature; to demonstrate that although the culture of Japan has evolved, we can still connect it to nature.
There are two exhibits in teamLab, Borderless and Planets. I only went in the Borderless exhibit because a visit to one exhibit takes up 2 to 3 hours. There were 3 very unique sub rooms: En Tea House, Butterfly House, and Athletic Forest.
En Tea House was definitely the place for Zen people. The room was dark and chilly, with teacups and pots displayed on the wall by the projector while music by the koto-a Japanese instrument-played. There was bamboo bars that separated the images of teacups and the teacup room. In the room, there were a few lamps hanging above the tatami mats, which are mats flooring for traditional Japanese houses. People sat on cushions and were being served a variety of Japanese tea.
The Butterfly House’s atmosphere was much more lively, but it still maintained the elegance of the first sub room. The originally stark black walls had “moving” crimson sakuras or the Japanese national flower, and butterflies projected on it. Lively western music and traditional Japanese music about sakuras also blasted through the speakers, which added to the overall atmosphere. The scenery of the butterflies and sakuras combusted into a million shards, only to piece back into images of bright yellow sakuras, billowing against ancient Japanese aboriginals trading sacred items.
Athletic Forest was the most interesting sub room. The room had slopes that resembled hills, columns that featured waterfalls and little ditches as ponds. There were 3 subsections: the big balloon section, the rock-climbing section, and the coloring section. The big balloon section was an area with humongous balloons stuck to the ceiling and floor mat flashing ever-changing colors. The rock-climbing section had poles with plastic “rocks” that would change colors from time to time. The rule was to step on the same colored rock from start to end-line. What I found the most interesting section was the coloring area. There were a selections of “animals” to color, and I had chosen a salamander. After coloring the salamander, one of the staff scanned the salamander and suddenly the same image of the salamander I had colored appeared on the slopes! It ran around and wagged its tail and interacted with the other animals that were scanned.
Overall, teamLab Borderless was one of the most interesting contemporary museums. It is one of the few museums I would never forget and would definitely go back next time.