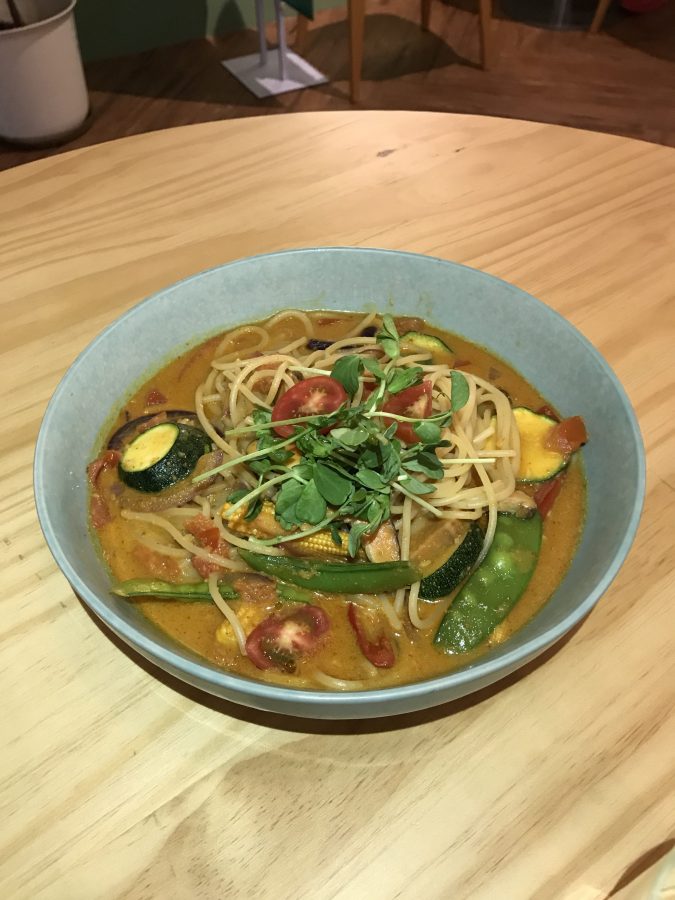 Location: No. 435, Sec. 6, Zhongshan N. Rd., Shilin Dist., Taipei City (Chain restaurant with a total of three stores in Taipei)
Average price: NT $280 – $320
Adopting a plant-based diet is among the most environmentally friendly things you can do as a consumer. Miss Green SuperKid, a new vegan restaurant in Tianmu, embraces the idea of reducing one’s  carbon footprint through food choices with the philosophy, “Many of us dream of saving the world. What if you can do it three times a day?”

Greenpower Protein Salad
NT $289
The Greenpower protein salad is a yummy, light salad served with a delicious vegan dressing meant to resemble a typical ranch sauce, which would usually contain dairy. What makes this salad special, though, is the vegan cheese: a thick, nutty cheese-like paste that more closely resembles sour cream. The avocado, dressing and fake “cheese” makes the salad rich with flavor, without being too heavy. However, this dish is not unlike something you could make at school for half the price.

Coconut Curry Pasta
NT $289
Perhaps the highlight of the entire meal, this pasta is packed with flavor and spice in every bite. The soup is rich, creamy and slightly spicy, and blends well with the sauteed vegetables and tofu. For such a large bowl of pasta, it doesn’t feel too heavy. It could be shared between two people or act as a complete meal for one and is definitely worth the price. However, the dish would be far better if the rather tasteless spaghetti noodles could be swapped out for something more fitting, like ramen noodles or rice noodles, to better absorb the soup.

Amazing Avocado Wrap
NT $290
The “Amazing” avocado wrap is actually a rather average tasting veggie wrap that is uncomfortable to eat. Although the eggplant was grilled with a tasty smoky sauce and the ingredients were well seasoned, there was far too much lettuce. The filling should have been mixed together better so that each bite is filled with flavor. There is not much special about this dish, and it feels somewhat disappointingly homemade. Despite its flaws, it is a filling dish and the large portion size makes it worth the price.