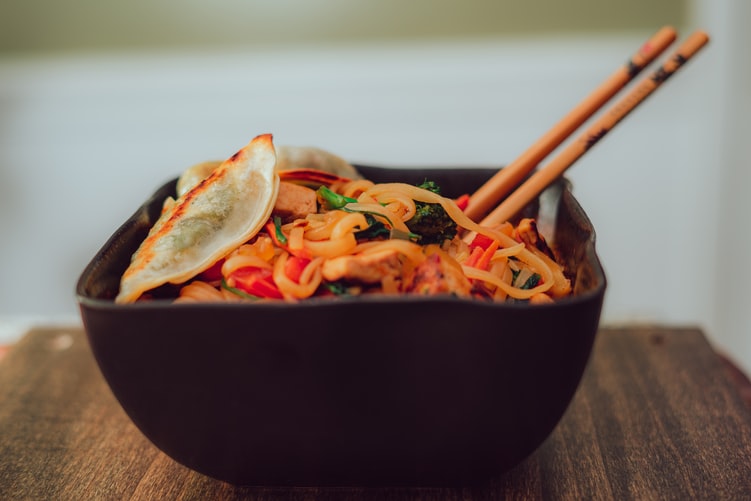 Jjajangmyeon, Jjamppong, Tang Su Yuk, also known as Korean-styled Chinese food, are commonly seen in Korean dramas and TV shows. These dishes are frequently ordered through delivery services in Korea.
Jinga, is a Korean Chinese chain restaurant located in Seoul and Gyeonggi-do, Korea. It is owned by chef “Jin Seng Yong”, one of the top four Chinese cuisine chefs from a television culinary competition show in Korea.
Jjajangmyeon
KRW 8,000
Jjajangmyeon, which means “fried sauce noodles”, is a Korean version of the Chinese dish, Zhajiangmian. Despite the close to their identical appearances, there are some distinctive differences between traditional Chinese-styled and Korean-styled Jjajangmyeon. The  the Chinese-styled noodles are relatively dry with a sauce with heavily comprised of minced beef, whereas the Korean-styled noodles have an excessive amount of sauce and lavish ingredients such as seafood, diced pork pieces, and sliced vegetables.
The Jjajangmyeon in Jinga comes in a big bowl drizzled in black bean paste sauce with an egg fry, chopped onions and pork mince. Its signature noodles are made from white wheat flour.
Before eating, one must mix the sauce, ingredients and noodles so that each strand of noodle is generously coated with sauce.
The sauce is both sweet and savory. The egg fry adds a rich, but not too heavy flavor to the dish. The amount of chopped onions, at first glance, may seem too much. However, it adds the right texture that the rest of the dish lacks and bolsters the sweetness of the sauce. Altogether, the perfect balance of flavors of all ingredients satisfies the mouth.

Tangsuyuk
KRW 20,000
Tangsuyuk is a sweet and sour pork dish, deep-fried to give the meat pieces that golden brown, crispy texture. It is served alongside a sweet jelly sauce with an array of mixed vegetables and fruits such as carrots, cucumbers, onions, tree ears and pineapples. Most restaurants serve the sauce in a separate bowl to maintain the crispiness of the pork.
Tangsuyuk was seen on most tables in Jinga; many groups ordered the dish as an accompaniment to their noodles or rice because it is easily apportionable.
The outer layer of Tangsuyuk by Jinga is extremely crispy; it upholds its texture throughout the average meal time. The sauce is less sweet and sour than convention which personally appeased me, as someone who does not enjoy a very pungent taste. However, I would have savored the dish even more if the sauce had a slightly higher degree of sweetness with the addition of pineapples.
Ultimately, Jinga serves high-quality, flavorful Korean Chinese dishes with speed and service. It is high-priced relative to most other Korean Chinese restaurants, but it guarantees a delightful experience to its customers.