KMT Rally: “Taiwan becomes tail of the dragon under the DPP” 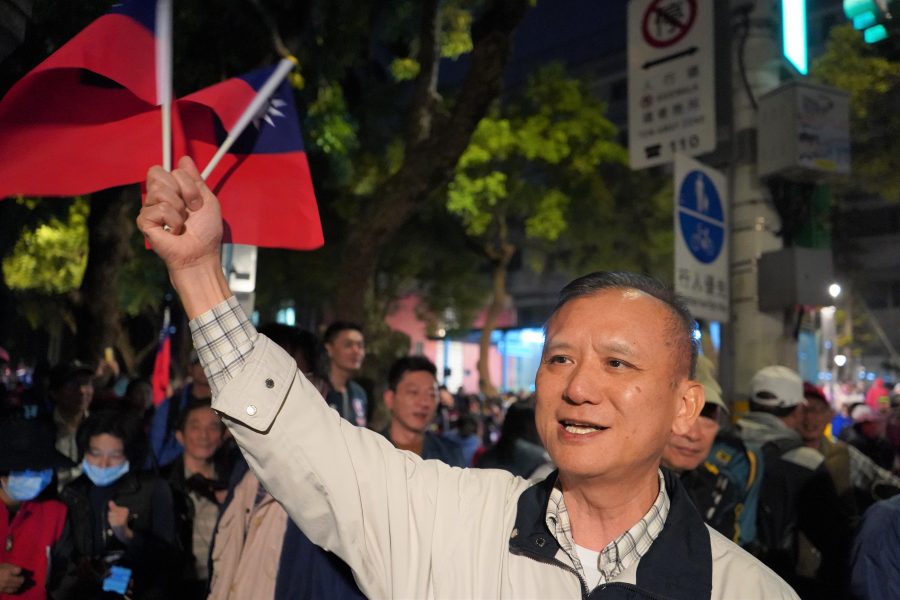 On Jan 9, over 400,000 Han Kuo-Yu supporters flooded along Ketegalan Boulevard, with the majority of the crowd gathered in front of the Taipei presidential office. Supporters attended the Kuomintang (KMT) rally, which began at 5 p.m., and continued on until 8:30 p.m. Han wrapped up the political rally by delivering his speech to the passionate crowd of supporters who attended.
Two days later, the 15th presidential election of Taiwan concluded as Taiwanese citizens watched President Tsai Ying Wen present her victory speech. She went on to accept her second term as Taiwan’s president on Jan 11, 2020.
The main candidates in the presidential election were Tsai Ing-wen of the Democratic Progress Party (DPP), and Han Kuo-Yu of the KMT, who was known as the current Kaohsiung city mayor.
Prior to the election, Han stepped onto the stage at KMT’s rally and said, “We must turn the tide on Saturday, and help Taiwan become a better place for many generations to come.” Han’s supporters waved mini Taiwan flags in their hands, which was conveniently sold among the different vendors located around the area.
Similar to previous years, the 2020 presidential election will be centered around the KMT and DPP. Han’s party represents supporters of the one-China principle, in which Taiwan and mainland China are given the title of “China”. More specifically though, the KMT’s belief in this principle differentiates from Beijing’s interpretation that calls for one China and that Taiwan should be part of it. While the KMT supports the one-China policy, DPP has continuously pushed for Taiwan’s sovereign status.
Among Han’s supporters, Taiwanese citizen, Polly, who worked for the General Electric company, displayed his full support for Han Guo-yu. He said, “for the last three and a half years, [the DPP government] has torn [Taiwan’s] relationship with China, and it is wrong.”
The 62-year-old Taiwanese expressed his thoughts on Han’s opposing party, “the DPP is trying to tell our people, we are not Chinese, no! That’s not right! We are Chinese, but we do not accept communism— these are two separate things, but the government is trying to mix the two ideas together,” he said.
Polly held strong views in what he thinks about the DPP government, he said, “the DPP tries to educate young people that Taiwan has no relationship with China, that’s wrong! This government is totally wrong!”
In support of Han, many families came back from different countries to vote for Han Guo-Yu. “I came all the way from Canada, and bought a plane ticket just to vote,” Maggie said. Maggie’s friend, Christina Chou, who currently works at a health medical center in Australia also attended the KMT rally. She plans to stay for a while to vote and show support for Han.
Fuschia, a 45-year-old Taiwanese-American, along with her husband and son came back to Taiwan over Chinese New Year break. “We came from the United States, my whole family is eager to vote for Han on Saturday,” she said.
Supporters who attended the rally all seem to have similar attitudes towards Han Kuo-Yu. They beileve that he is not only a prominent figure within the KMT party, but also the winning candidate for the election. Ms. Chou said, “he will be elected, he is a very good person who can manage the country well and not be corrupt.” Ms. Chou’s friend, Maggie said, “he really cares for Taiwanese citizens. I rarely see this, he’s just like Chiang Ching-Kuo, The reason he is able to run for president is because people like us support him, not because he has a special connection.”
Many supporters seem to recognize Han as a key role in KMT politics, but a few chose to support the KMT party instead of Han himself. “Han is only a puppet in the KMT, whatever the party tells him to do, he will obey.” Ms. Shi said.
Mr. and Mrs. Lin, both ages 65, are planning ahead in thinking about the policies Han should implement if he becomes Taiwan’s new president. “Han needs to enforce better financial discipline— what should be spent, what should not.” Mr. Lin said.
The couple wishes Han to prioritize education in Taiwan. “Han should invest in more schools, recruit more professors, that way, Taiwan can improve our university education’s competitiveness worldwide!” Mr. Lin said.
Polly also contributes to the conversation in his expectations for Han, “he should improve Taiwan’s relationship with China. I see China as an opportunity, but the Taiwanese government sees that as a risk.” he said.
Polly also said, “I have seen what Taiwan has been through. I have seen when the government is fully controlled by Chiang Ching-Kuo, which is when we had a clear vision.” Polly gives Taiwan the title of a dragon, “we are the head of the dragon, but with the DPP government, Taiwan becomes the tail of the dragon!” he said.