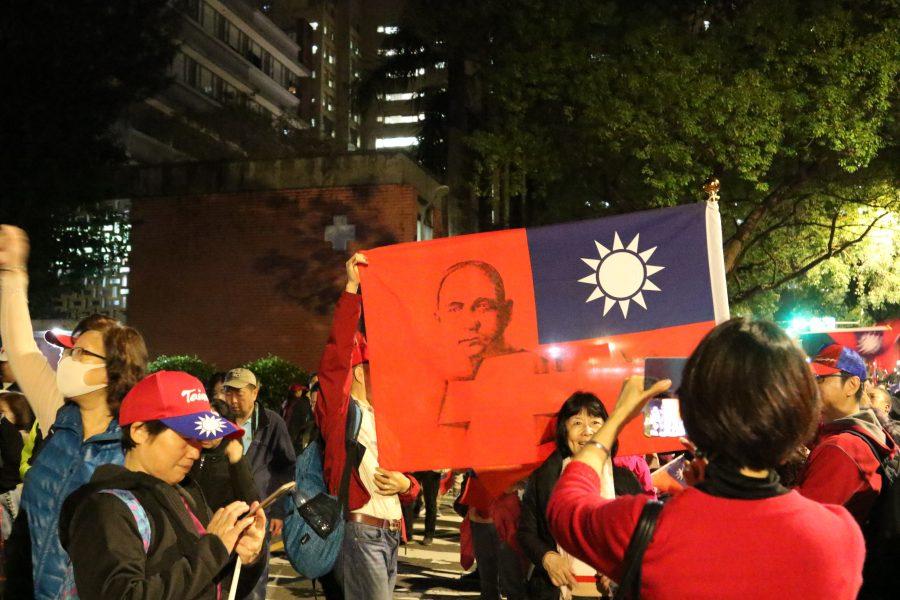 On Jan. 9, 2020, around 1 million supporters gathered at Ketagalan Boulevard in front of the Presidential Office to attend Kuomintang (KMT) Han Kuo-yu’s rally.
Beginning from 5 p.m., crowds of supporters began to gather around the area. Waving  the Taiwanese flags they held in their hands, and chanting in support of the opposition party, they waited for the arrival of Han Kuo-yu, who made his appearance around 8:30 p.m..
Unlike usual political rallies, this rally seems to have a more diverse and open audience. Not only were there people in their 40s to 70s, there were also children and millenials in their early to mid-20s.
Many of the supporters felt like it was their duty to come out here in support of Han Kuo-yu and in opposition to President Tsai Ing-wen’s reelection. “My whole life, I have never felt the need to attend a political rally. But I’ve had enough of what the government has done to our country, I had to come out here in support of candidate Han Kuo-yu,” Mrs. Wu, a woman in her 40s, said. She had two flags attached to her shoulders, and she held another flag in her hand. Accompanying her were her husband and her son, who also held the same beliefs.
The gathering of so many followers in support of what they believe is the best candidate for the 2020 Taiwan Presidential Election is a touching moment for many people present, including Mrs. Wu. “Look around you, all these people out here, in this cold weather, their faces pale and their expressions weary, is this not proof of what the government has done to its people? Does this scene not bring tears to your eyes?” she said. She believes that it is time for the Taiwanese government to step it up and stand up for what is best for Taiwan’s citizens.
The improvements that candidate Han Kuo-yu has done for Kaohsiung and his sincere and righteous personality are some of the main reasons many supporters chose to follow him. “He is very considerate and generous, I have witnessed all the improvements he has done for Kaohsiung, and we hope he can extend his love and generosity from kaohsiung to all of Taiwan, so that many people can feel happiness once again,” Mrs. Kuo, a woman in her 40s from Tainan, said.
Along with Mr. Kuo, they felt that their lives have become significantly harder under the government of the Democratic Progressive Party the past years. And although both of them are median voters, they felt like the DDP has lied to its citizens for too long.
“Our wages remain the same, yet the price of objects are growing, college graduates are struggling to earn even 20,000 a month when 20 years ago we could’ve easily earned at least 30,000, ” Mr. Chen said.
Many citizens are worried for their future generations, wanting the best for their children and grandchildren. “Han Kuo-yu is doing so much for future generations. Yet, all of you youngsters have been brainwashed. We all have kids and grandchildren, this is why we follow him.” another Mr. Chen said.
Han Kuo-yu’s followers firmly believe that Han Kuo-yu would not disappoint, and would become the new president starting in 2020. “President Tsai Ing-wen needs to step down, from Saturday onwards, Han Kuo-yu will become the confirmed 2020 president.” Mrs. Wu said.