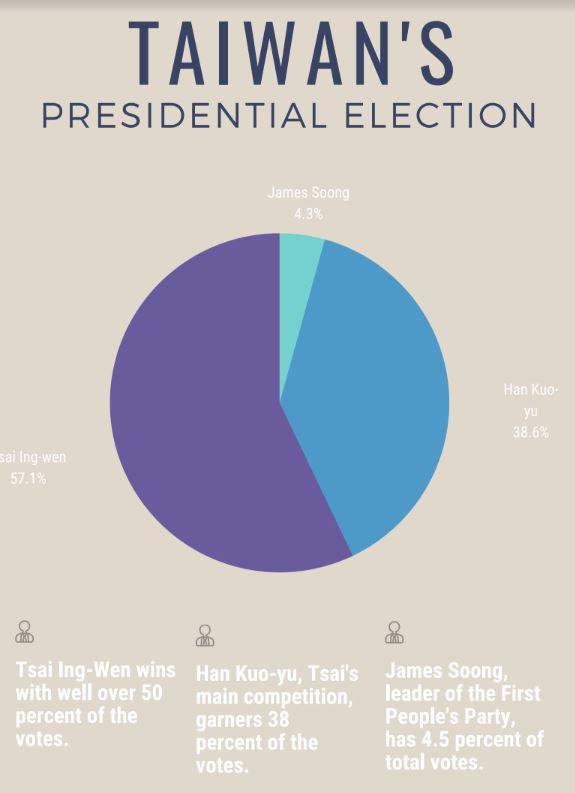 The Taiwanese went to the polls on January 11th, 2020 to vote for their candidates in the 15th presidential and vice-presidential election of Taiwan (the Republic of China). Some 19 million people were legible to vote between the two main leaders with very different visions for Taiwan’s future. President Tsai Ing-wen of the Democratic Progressive Party (DPP) sought a second term and won. President Tsai will be inaugurated on May 20, 2020. She believes in defending Taiwan’s democracy and liberal values against Beijing, China. Her main competitor, Mr. Han Kuo-yu, member of the Kuo Ming Tang (KMT) favors a warmer tie and relationship with China, stating that it would boost Taiwan’s fortunes. The third presidential candidate, James Soong, leads the People First Party.
In 2016, President Tsai won the 2016 presidential election with more than 56 percent of the vote. This year, President Tsai won with just over 57% of the ballot — a record 8.2m votes — well ahead of her rival Han Kuo-yu. During President Tsai’s victory speech, she vowed to defend the people of Taiwan as well as boost Taiwan’s economy. “We must work to keep our country safe and defend our sovereignty,” President Tsai said.
Many factors have led up to President Tsai’s dramatic victory. One of the main reasons was the huge amount of support from Hong Kongers. While China placed a huge amount of effort to hurt Taiwan’s economy, many citizens of Hong Kong fled to Taiwan because of the protests against the “one country, two systems” model. The citizens of Hong Kong have grown to become resentful of China after the government proposed a law allowing extraditions to jurisdictions including mainland China. Although the extradition bill has since been withdrawn, protesters’ demand for greater democracy, with increasing anti-Beijing sentiment. This also made Taiwanese voters increasingly fearful of Beijing and felt that Han Kuo-yu’s beliefs would not be beneficial to Taiwan.
The vote drew a large turnout including thousands who flew home from abroad. Ms. Zheng is an attendee at the DPP rally who flew from Hong Kong. “I think this [year’s election] is a critical point for Taiwan to go after its democracy,” Ms. Zheng said.
Another factor that greatly contributed to President Tsai’s victory the vast majority of her supporters are under the age of 30. Younger people have strong Taiwanese identities and overwhelmingly dislike the KMT, but that does not imply that they love the DPP. Mr. Luo, another attendee at the DPP rally, states that his family values inference his children’s political beliefs. “Ever since [my children] were young, our family has always encouraged our children to be independent so they look up to President Tsai.”
This year, however, many voters have quite mixed feelings toward the DPP. However, they voted for the individual candidate that comes closer to their beliefs, which in this year’s presidential election was President Tsai. Mr. Zheng, a supporter of the KMT party, attended the DPP rally along with his family. Although he did not support the DPP party, he believes that President Tsai will allow “Taiwanese people to be free. If you go back to Hong Kong, you can see there is no freedom.”
If Taiwan continues to pursue independence from China, Taiwan must be careful not to depend on USA too much as they have their own tensions with Iraq to solve.
Although Han Kuo-yu had lost against President Tsai Ing-wen, Han Kuo-yu will still remain a political power of Taiwan, appealing to those who sought for stronger economic relations with China.