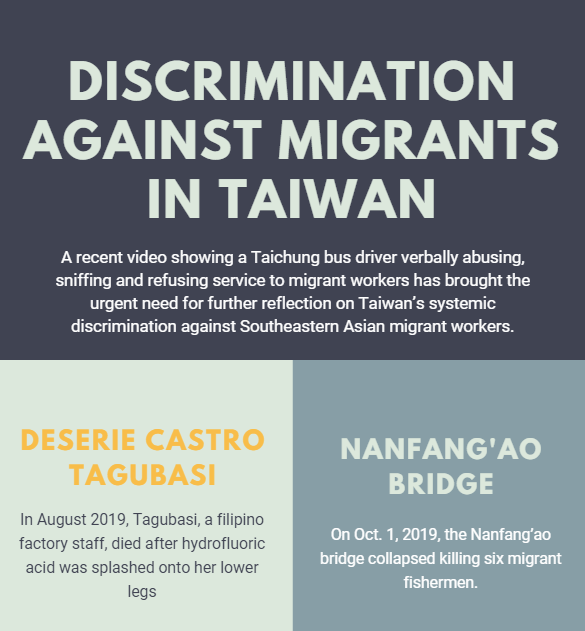 A recent video showing a Taichung bus driver verbally abusing, sniffing and refusing service to migrant workers has brought the urgent need for further reflection on Taiwan’s systemic discrimination against Southeastern Asian migrant workers.
In August 2019, Deserie Castro Tagubasi, a Filipino factory staff, died after hydrofluoric acid was splashed onto her lower legs at Tyntek Corp, a LED manufacturer and Taiwanese semiconductor; Tyntek did not provide safety training to Filipino workers handling dangerous chemicals — a job Taiwanese citizens were reluctant to do.
On Oct. 1, 2019, the Nanfang’ao bridge collapsed killing six migrant fishermen. Among the deceased were Serencio Andree Abregana (44, Philippines), Mohamad Domiri (28, Indonesia), Ersona (32, Indonesia), Escalicas Romulo Jr Ilustrisimo (29, Philippines), Impang George Jagmis (47, Philippines) and Wartono (29, Indonesia).
Following the incident, there was an outpour of support and sympathy from many domestically and internationally. Netizens especially expressed their thoughts online, castigating the Taiwanese government to improve the treatment of migrant workers, fishermen in particular.
Greenpeace released a report on this subject, Made in Taiwan: Government Failure and Illegal, Abusive and Criminal Fisheries, detailing human rights abuses illegal, unreported and unregulated (IUU) fishing in Taiwan.
While the government has taken some measures to resolve the issues, such as passing the “Act for Distant Water Fisheries in 2017”; the act includes regulation of labor standards on board of fishing fleets, regulating standards for those working on larger vessels (the six deceased fishermen from the Nanfang’ao bridge fished closer to shore).
But more must be done. During the ongoing coronavirus outbreak, fishermen and factory workers, who live in overcrowded spaces, have expressed concerns at the risk of infection. Moreover, an illegal Indonesian woman was confirmed as the 32nd COVID-19 (coronavirus) case in Taiwan; at the time, she was hired to care for an elder man who was later diagnosed with the virus in the hospital.
According to the Ontario Human Rights Commission (OHRC), systemic discrimination can be described as patterns of behavior, policies or practices that are part of the structures of an organization, and which create or perpetuate disadvantage for racialized persons.
The caregiver’s case has raised concerns and fear that undocumented migrant workers could likely become loopholes of COVID-19 preventions. Currently, there are more than 700,000 Southeast Asian migrant workers in Taiwan with an estimated 50,000 undocumented migrants. Many undocumented workers would be afraid to seek medical help and come forward as they do not want to risk the possibility of deportation.
Most recently, the migrant worker denied entrance on the bus due to the driver deeming the perfume as “too much” has drawn many comparisons to Rosa Parks — a civil rights activist who rejected the bus driver’s order to give her seat in the “colored section” to a white passenger. In the video uploaded on youtube, Taichung bus driver Chao was filmed verbally abusing, sniffing and refusing service to migrant workers.
Ultimately, while Taiwan has supported basic rights of Hong Kong pro-democracy protesters, ethnic minorities in China and its own citizens, very few advocate for migrant workers in Taiwan. Taiwan needs to reform labor laws, advocate for the Ministry of Labor, and create enforcements to ensure Southeast Asian workers’ safety.