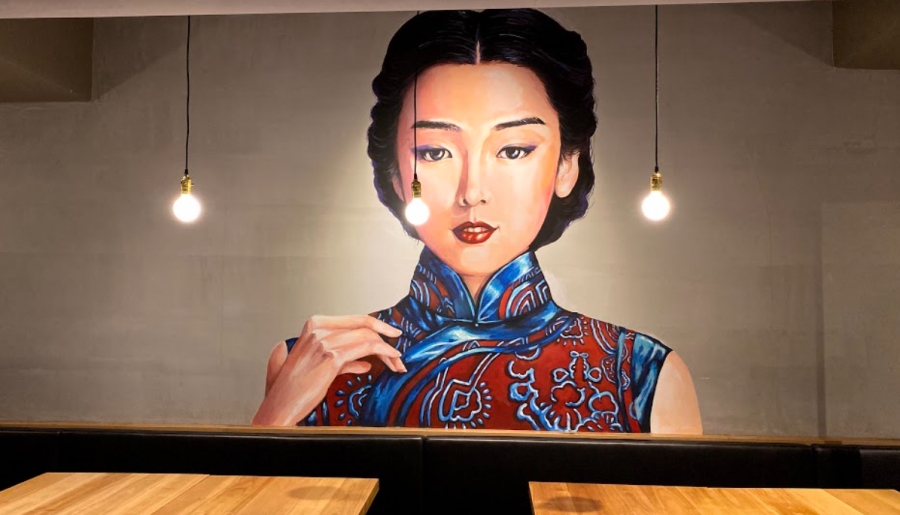 Address: No. 8, Aly. 5, Ln. 107, Sec. 1, Fuxing S. Rd., Da’an Dist., Taipei City
Rating: 2/5 stars
Average price: $$
Gu Dian Mei Ren is a Pan-Asian vegetarian restaurant by the Mia Cucina group. The restaurant serves a wide range of dishes; the most popular food items include their fried rice, dumplings and noodles. The restaurant definitely sports an elegant interior with its huge glass windows, simple Edison light bulbs and Instagram-worthy walls. However, despite the ambiance, the restaurant was a bit pricey for its rather average tasting food.
Umami Seaweed Fried Rice (NT$ 180)
The first dish that I tried was the “Umami Seaweed Fried Rice.” Served with green beans, red onions, sesame seeds and eggs, the fried rice did not disappoint. It was a perfect balance between sweet and salty. The seaweed that was added on top also helped enhance the flavor of the fried rice. This was one of the few plates in the restaurant that I would order again as it was delicious.
Soy Sauce Tofu Clay Pot (NT$ 320)
The “Soy Sauce Tofu Clay Pot” was tasty but one of the pricier plates in the restaurant. Served with bamboo shoots, mushrooms and green onions, this tofu plate was perfect over white rice. The tofu was also very soft and perfectly cooked. However, this dish could have been easily replicated at home for a cheaper price.
Dan Dan Noodles with Sesame Sauce  (NT$ 150)
The “Dan Dan Noodles with Sesame Sauce” dish was tasteless and very dry.  This dish was served with renkon, cucumbers and sesame sauce, but the sesame sauce was too thick and barely covered the entire noodles. This dish could have been easily bought at 7-Eleven for a lot cheaper and a lot tastier.
Loofah Soup Dumplings (NT$ 195)
The “Loofah Soup Dumplings” were decent, but not amazing. Served with chopped green beans and luffa, the dumplings were a bit on the drier side and caused the dough to stick to the plate. The dumplings were not up to the standards of Din Tai Fung, so for those who are only looking to eat dumplings, this would not be the best place to go.