The hyperloop: a pipe dream? 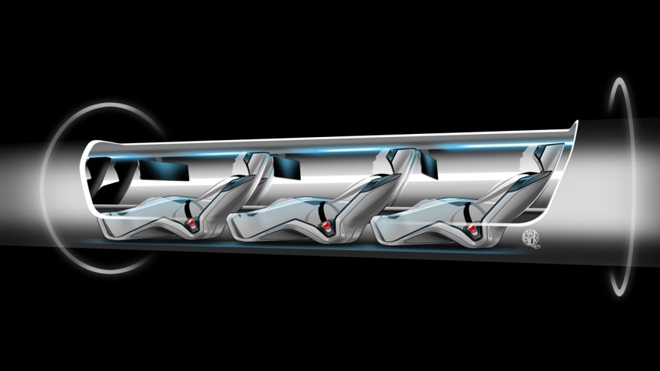 “It’s a cross between a Concorde, a rail gun, and an air hockey table,” explains Elon Musk.
As you sit in your seat within the compartment, you take a sip of your freshly-brewed Javan coffee. Your head turns to the window, as the frontier zips by at subsonic speeds. The speakers suddenly blare, and the drone-like voice of the operator resonates through the room: 10 minutes to Los Angeles.
A fantasy scenario? CEO of Tesla Motors and SpaceX, billionaire Elon Musk, claims he possesses that kind of technology to make this dream a reality — well, theoretically. According to the alpha design released on August 12, the Hyperloop would connect LA to San Francisco in the short time span of 35 minutes, unaffected by weather, but possibly by earthquakes.
Here’s how it theoretically works: the capsules, filled with passengers and equipped with air-bearing skis, are sucked along partially-vacuumed steel tubes like pucks suspended on air hockey tables. Without wheel resistance and significantly less air resistance, the capsules basically “glide” through the travelling tubes without touching the sides of the tubes at all. Hypothetically, it will be able to reach an astounding top speed of 760 mph (1,220 kph). Due to the vacuums inside the tubes, Elon Musk predicts that the pods will travel at subsonic speeds without having to break the sound barrier, due to low air resistance, which means that the pods will require very little energy. However, this proposal comes with an impressive price tag of 6 billion US dollars.
So why spend up big on a Hyperloop when we already have highways and train routes in place? According to CNN, the trip would beat traffic and cut lots of travel time, as well as being very eco-friendly, harming the environment considerably less than the combustion engines that we regularly use.
However, there has also been criticism of Musk’s Hyperloop. Michael Anderson, a Professor of Agricultural and Resource Economics at UC Berkeley, believes the project will require “100 billion [dollars] to build what they’re proposing.” According to Dan Sperling, Founding Director of the Institute of Transportation Studies at the University of California: “the whole technology is unproven… I know [Musk’s] a brilliant guy, but it just doesn’t pencil out.”
Truly, this mode of transportation seems a bit off the scale, but with the wealth and resources of Elon Musk has, this project has a very bright future.