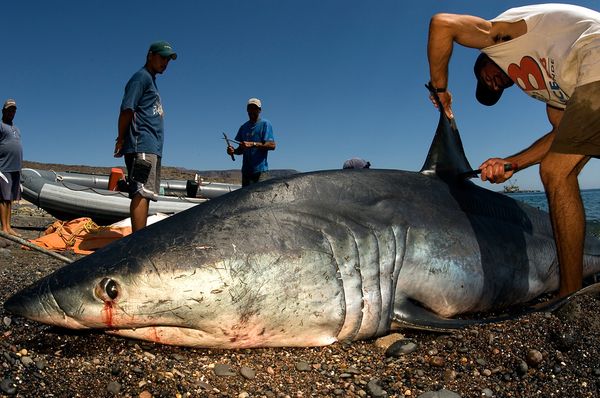 Shark fin soup is a popular Chinese soup that is usually served at special occasions, such as weddings, banquets, and business dinners. The soup dates back centuries ago to the Ming Dynasty where it was coveted by the emperors because it symbolized wealth, power, prestige and honor. Today, the dish is also believed to bring luck and fortune. For many elders in Taiwan, a wedding without shark fin soup is like a New Year’s party without champagne, and its absence in big-ticket banquets is almost an insult to the guests.
But whatever luck or fortune shark fin soup brings, they also bring devastation to the shark population. The process fishermen undertake in order to acquire the soup’s namesake ingredient is called “finning.” Finning occurs when sharks are captured, and their fins are sawed off. The sharks are thrown back into the water, only to sink to the bottom of the ocean, unable to swim without their fins. Shark specialists estimate that 100 million sharks are annually killed because of shark finning.

Taiwan was the first Asian nation to ban shark finning in 2012, restricting fishermen from killing sharks for their fins. It is required for sharks to have their fins attached when unloaded from fishing boats, but there’s nothing stopping fishermen from cutting off the fins after the sharks are loaded.
Taiwan holds the world’s 4th largest shark fleet, and Taiwanese mafias dominate trade in Central America, specifically in Costa Rica, because of the shark fins’ high value. Shark finning was made illegal in Costa Rica in 2012, but there is a viable illegal market still present.
The ban on shark finning in Taiwan may have led us in a step towards preventing this act of animal cruelty executed for an expensive item on the menu, but there is still a long way to go. Today, both wildlife groups and the Chinese government contend that 95 percent of shark fin consumption takes place in mainland China, Hong Kong and Taiwan. Are you a part of this consumption? Visit Blue & Gold online to comment and voice your opinion regarding this issue.