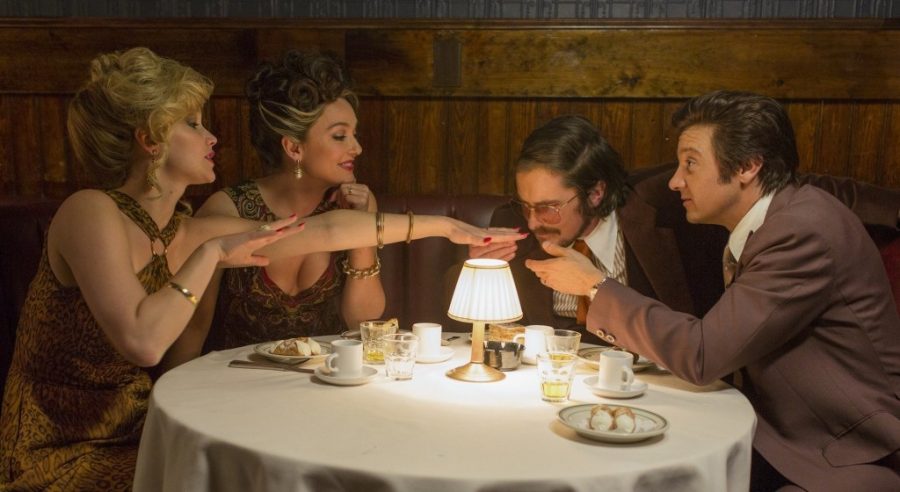 Starring the unlikely trio of a con artist couple and an FBI agent, American Hustle is loosely based on the “Abscam” sting operation of the late 1970s. Irving Rosenfeld (Christian Bale), donning a cool pair of shades, spends most of his time managing his dry cleaners in New York and selling forged or stolen art as a side-job. He meets and falls in love with the ambitious Sydney Prosser (Amy Adams) at a pool party, and they begin an affair as well as a loan scam business.
Throw in Irving’s wife Rosalyn (Jennifer Lawrence), and you have yourself an eccentric love triangle. Rosalyn, the mother of his adopted son Danny, refuses to divorce him and creates a bit of a sticky situation for everybody throughout the film.
Things take a turn when FBI agent Richie DiMaso (Bradley Cooper) busts Irving and Sydney through their fraudulent business. Fortunately, DiMaso is on a mission to expose corrupt officials, so he offers to release the con-experts in exchange for their help with a bureau sting. Thus, they begin stumbling their way through a complex sting involving a few “Arab sheikhs” and one Mayor Carmine Polito (Jeremy Renner).
While it actually tells a serious tale of political corruption, American Hustle is so drizzled with amusement that you can’t help but smile through the entire 138 minutes. Just when you expect a certain outcome, you are thrown towards another direction.
As the ten Oscar nominations it has received may imply, American Hustle’s star-embellished cast delivered. Adams forges a medium between seductiveness and an innocent desire for a twisted version of the American Dream. Bale not only put on forty pounds for the role, but manages to tip the scales with a stellar performance as well. Snazzy, charismatic yet human all the same, Irving elevates the film.
For those wondering if American Hustle is worth their investment, fret no more. Its greatness, with or without the hype, is no lie.