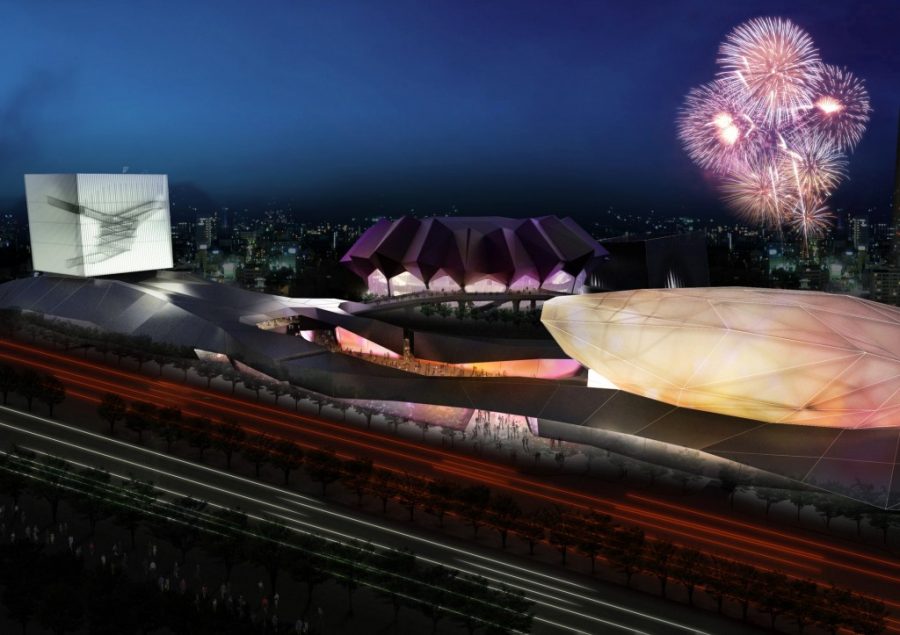 Commuters pour out of the Jiantan metro station during rush hour like a school of fish as they find their way home under the setting Taipei sun. Occasionally one will halt and look up at the massive structure coming to shape above the heads. The rows and columns of beams make up a central cube with three protruding shapes – one sphere and two blocks. What passersby may not know is that each of these prominent formations will make up an auditorium. The three auditoriums will then join the central cube to create the striking new Taipei Performing Arts Center.
Rem Koolhaas, a Pritzker Prize winning architect, and his firm OMA designed this latest venue adjacent to the Shilin Night Market. The center will become Taipei’s 3rd international-scale performing arts location, after the National Concert and Theater Hall at Liberty Square. It will also feature a 1,500 capacity Grand Theater, an 800 seat Multiform Theater, and an 800 seat Proscenium Playhouse. The Grand Theater and the Multiform Theater can also be combined together into a Super Theatre with a 100-metre long space for experimental theatrical possibilities.
“This arrangement allows the stages to be coupled for unsuspected scenarios and uses,” said Rem Koolhaas.
Koolhaas is fond of buildings that allow the community to explore, so he made sure this project, his first in Taiwan, would be no different. With the inclusion of a public path looped in the building, visitors will be able to work their way through the structure, ultimately rewarded by the sky garden atop with stunning views of the city.
The abstract-looking theater will also hang above the foundation like some kind of spaceship, never actually touching the ground. Instead it is elevated by several pillars creating a public plaza underneath for visitors to discover.
“You will only understand it when you have seen it. It’s super exciting, we encourage everybody that loves architecture to come and see it because it’s spectacular,” said David Gianotten, one of the partners in charge who was present at the topping out ceremony in Taipei on August 27.
Across town there is also another music hall coming to life. The Taipei Pop Music Center will be a more pop music focused venue that mixes concert halls with public spaces for shops and restaurants. It is located on a 9 hectare lot in Nangang district between the Nangang and Kunyang metro stations, and is currently set to be completed by 2016 and operating by 2017.
The goal of this center is to create a cultural hub for Taiwan’s well established pop music industry. It will house a 5000 capacity main auditorium and a 3000 capacity outdoor concert hall, making it one of the most ideal venues on the island to hold large scale concerts.
The structure was designed by Jesse Reiser’s architecture firm RUR, and will also include an Industry Shell for production facilities and a Hall of Fame. With four floors of exhibition space, a café, administrative offices, research facilities, and a 300-seat lecture hall, the Hall of Fame will further boost the Taipei Pop Music Center as the place for the celebration and display of pop music in Asia.