Cynthia capturing life through a lens 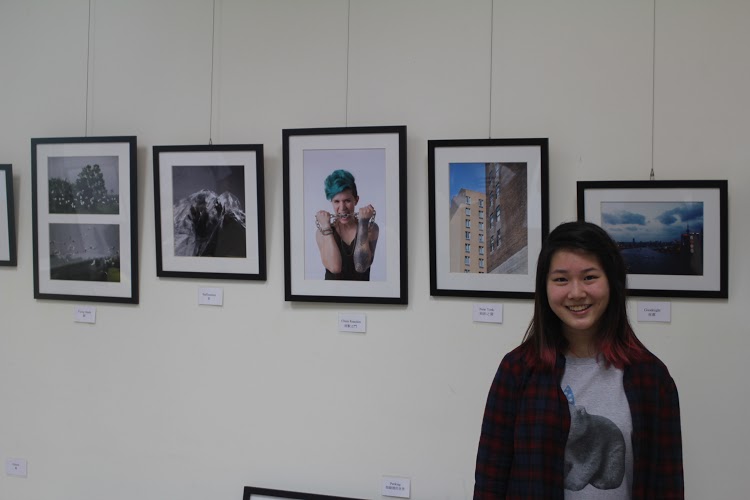 Photo Courtesy of Katrina B.
Cynthia L. (12) sees life through a lens. From the little pink point-and-shoot she received when she was four, to disposable cameras, to her most prized possession, her Canon 5D Mark III, cameras have always been her niche.
“Photography can be interpreted infinite ways and give people the chance to explore their imagination,” said Cynthia. “We only live every moment once so it’s important to capture those moments.”
Cynthia finally got the opportunity to  share her photography this year in her first solo exhibit. She is currently exhibiting from November 15 to December 19, in the unused waiting room of the Smart Care Rehabilitation Clinic in Danshui.
Because she wishes her art to be a two-way conversation with her audience, Cynthia put up a message board, inviting people to write what they thought. “My favorite [message] was from a kind lady who signed off as ‘the not so stranger’” who commented on how “she enjoyed most of my photos and could see my aspiration,” said Cynthia.
While she used to enjoy taking photos of beautiful landscapes and flowers, Cynthia realized that it was a little too “been there, done that.” To her, “anyone can take a photo and slap on an Instagram filter. Creating an image is the best part.”
Her favorite theme is insanity. “Insanity could refer to literal mental illness or maybe being crazy for someone or insanely frustrated,” she said.
One of her favorite photographs is of a jellyfish she took at an aquarium in Boston. By manipulating the colors, she turned the ordinary into the extraordinary. “It’s kind of scary, creepy, and just straight up weird,” said Cynthia.
Cynthia attended a pre-college summer program last year at New York’s School of Visual Arts, where she did multiple photoshoots with different models. Her craziest moment was photographing children. “They ran around throwing things around, turning chairs upside down, sticking their tongues out, but their mothers and I agreed that it’s best to capture kids in their natural state – insanity, in a positive way, rather than have them fake a pose,” she said.
At this program, Cynthia also experimented with nude photography. “The process for nude photography was less awkward than you would imagine,” she said. “I personally think nude photography is delicate and beautiful, so I was excited to do it, rather than scared or awkward or even embarrassed.”
Besides attending this program, Cynthia also had a summer internship with photographer Noah Sheldon. This was the summer she realized photography was something she wanted to do for the rest of her life.
Cynthia constantly thinks about lighting, framing, and composition everywhere she goes. Photography has also strengthened her to be less afraid of rejection, criticism, and approaching others. Though social media such as Tumblr, Flickr, and Facebook, Cynthia is able to share her photos with people around the world. Her Instagram account, peopleofhereandthere, has over 2.7k followers. “It’s so fascinating to me that a simple image could evoke so many emotions, and to have that kind of power is inexplicably great,” she said.
For more of Cynthia’s photography, check out her Instagram: peopleofhereandthere or her website: www.cynthialee.photography