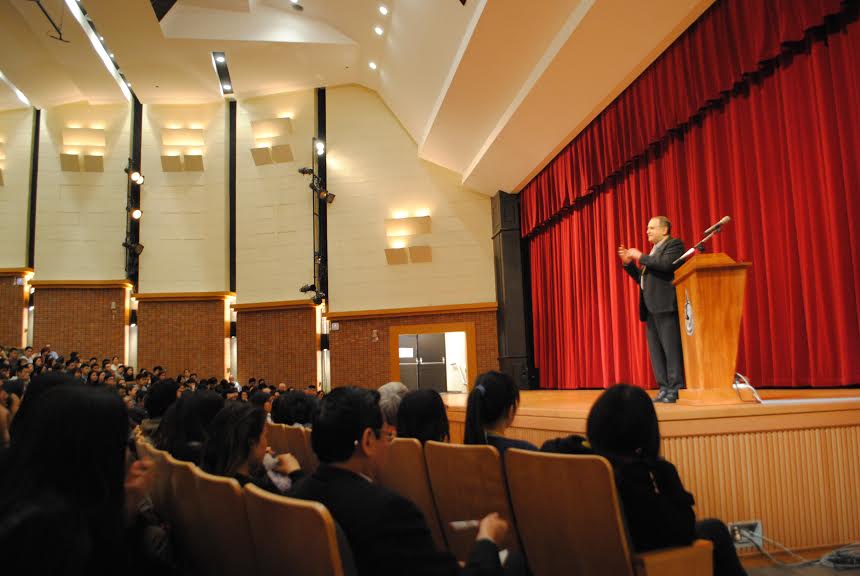 “Is there a way for Taiwan to become recognized internationally for its sovereign?” asked Kevin H. (12) as he stood up from a packed auditorium. His question was directed to Dr. Steven Goldstein, who had just finished his talk on the current relations between the United States, China, and Taiwan. After a brief pause, Dr. Goldstein replied with a resolute “no.” According to Dr. Goldstein, becoming truly sovereign is nearly impossible for Taiwan since most countries are unwilling to sacrifice their relations with China to recognize Taiwan’s sovereignty.
On January 7, Dr. Goldstein visited TAS for the second time since 1970. During his stay, he gave a presentation in which he provided a historical background of the US-China-Taiwan relations before discussing Taiwan’s unique position in these relations. A lengthy questioning session followed.

Dr. Goldstein, Sophia Smith Professor of Government at Smith College, is a distinguished expert on Sino American relations and Chinese domestic and foreign policy. According to Dr. Hartzell, he has “been at Smith College for as long as Mr. Arnold has been at TAS.” He is also the director of the Taiwan Studies Workshop at Harvard University and has taught classes at the Fletcher School of Law and Diplomacy and Columbia University.

For Rebecca P. (12), it was particularly interesting that Dr. Goldstein spoke of how the US hoped to avoid playing the intermediary between China and Taiwan. She said, “I always assumed that the United States was a willing intermediary that was invested in the China-Taiwan situation, so I found his response both surprising and disheartening.”