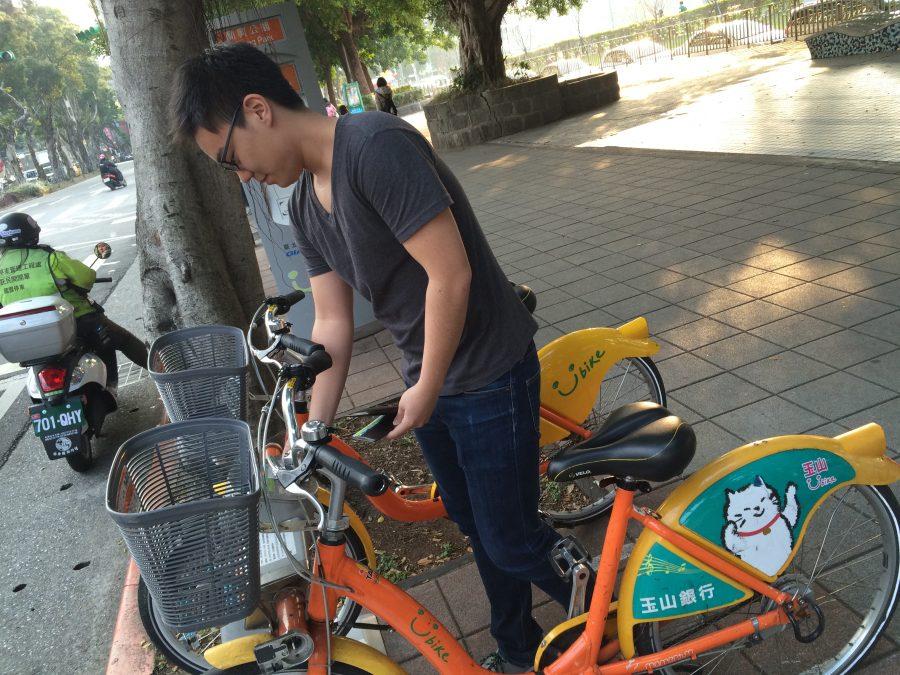 Senior Victor K. parks his YouBike back into the slot after realizing the brakes are broken and the seat is shaky.

This is not unusual for regular YouBike users. The YouBikes are not always in great condition and often have small problems that can be risky for riders, as well as for drivers and pedestrians around them.

Steven C. (12) says, “Some of the Youbikes are defective so it can be dangerous at times. There are various defects such as broken wheels or broken brakes.”

Following the death of a YouBike user late last year, Wang Sheng-Wei, Taipei Department of Transportation Commissioner, announced that the city will introduce accident insurance that will cover injuries to others for which the riders might be liable, but not for injuries to riders themselves.

However, Wang says that bike riders are not required to purchase this insurance and the choice to wear helmets while riding will remain up to the rider.

According to the Taipei Times, the department also plans to add about 4,000 new bike spaces this year around the city with a focus on areas near MRT stations.

The newly added bike racks will reduce the threat that bikes parked on sidewalks pose as they have grow increasingly common.

YouBikes’ popularity has undoubtedly spread to Tianmu. Many TAS students have adopted the bike riding habit but it has been limited by the small number of stations in the neighborhood. The closest station to school is the YouBike Lanxing Park Station, across Shidong Elementary School.

YouBike rider, Samuel B. (11) is not worried by the dangers. “I feel safe using them in Tianmu because there’s a lot of sidewalks and other places you can bike besides the road but I don’t use them often because there aren’t really that many stations around Tianmu.”

Despite this inconvenience, ever since they were installed, the YouBikes system has proved to be both time and cost-efficient.

The Transportation Department has been discussing the possibility of charging for the first 30 minutes.

The decision will be finalized and announced at the end of March.

A regular user of both MRT and YouBikes, Maggie C. (12) says, “It depends on where I want to go. If it’s close by [my house], I don’t have to take the MRT so I just use the YouBikes.”

There are also students like Richard Y. (11) who use alternative modes of transportation.

“I ride bikes but not the Youbikes because there’s a biking place near my house that had already existed before YouBikes so I just use that,” says Richard.

Students have also noted that the headlights and the bell on the YouBikes are really helpful for riding near pedestrians or riding in the dark.

When questioned about the safety of riding on the sidewalk, Anthony T. (12) says, “I don’t worry about it particularly but there’s a danger with riding any bike so I’m not too concerned.”

Not only are students comfortable with riding on the streets in Taipei, many students think that the YouBikes system is great because it encourages people to exercise more and use less transportation.

Before you hit the road, make sure your YouBike is not faulty. Steven says, “You just have to test out your YouBike and if it’s broken, just park it back in the rack and get a new one.”