Off the Shelf: Summer Reading Edition 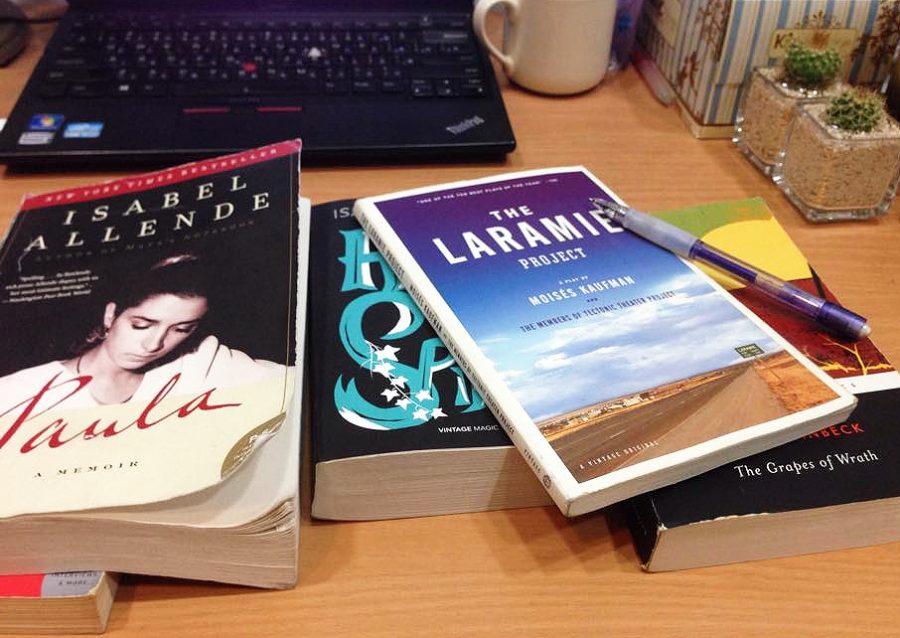 Four summers spent, twelve summer reading books read–so it goes for the average senior at TAS. Okay, so the amount of summer reading books actually read by your average senior would probably be somewhat lower–but that’s beside the point.
Many people, on a surface level, claim that summer reading is pointless or annoying. However, when you closely examine the intentions behind the program, you’ll find that it’s not so aimless.
“Some students will read whether with or without the school requirement, but the summer reading program does get them to read things that perhaps they ordinarily wouldn’t,” says Trisha S. (12). “Also, I think the books that are chosen for each class give you a little bit of insight into what kind of books you’ll read for the rest of the year, so it’s a mini-introduction to your teacher.”
Like most others, I never quite appreciated the pressure dealt by the impending summer reading assessment. But in spite of all the last-minute cramming and mild stress I’ve endured from the program (or my own lack of self-discipline), I do have to say that I’ve greatly enjoyed the overall experience. There’s always a lot to learn from each book you read, even if you’re obligated to read it.
For those who dislike reading in that context, though: I hope to convince you to read these summer reading books voluntarily. Without further ado, here are my top three picks out of the twelve I’ve ever been assigned.
1. The Count of Monte Cristo by Alexandre Dumas (Honors English 9)

I’m usually not the biggest fan of what critics hail as literary classics. Don’t get me wrong, I try incredibly hard to like them–but they always seem to fall short for me. In fact, having to make the effort to enjoy such books at all already greatly detracts from the reading experience.
Luckily, I didn’t have to try to enjoy The Count of Monte Cristo. Although only an abridged version, my ninth grade reading assignment still intimidated many in all its thick glory. The tale begins in nineteenth century France and follows a young merchant sailor’s short-lived success. Upon his downfall at the hands of his rivals,  he embarks on a steady path towards revenge.
What makes this novel work for me is that it does not put its long-winded buildup to waste. Often, books weave out riveting backstories and amass all this anticipation, but they disappoint you by settling for anticlimactic endings. Although such endings may be meaningful at times, for the most part they just make all that came before it seem like a waste of time. The cliche says that it’s not about the destination but the journey, but every story needs a fitting resolution.
And you get one heck of a grand resolution in this book. If you’re up for a captivating tale of epic proportions, then The Count of Monte Cristo is your guy.

2. Animal Farm by George Orwell (Honors English 10)
For a taste of some iconic satire, have a bite of the crops from Animal Farm.
According to Orwell himself, the eccentric novella is based off of the events leading up to the 1917 Russian Revolution and the progression of the Soviet Union under Stalin. Instead of your average cast of Stali

n and Trotsky, though, you get a handful of scheming pigs.
The novella commences when an elderly, large boar named Old Major summons all animals at one Manor Farm and calls for a revolution against humans, whom he considers to be parasites. Soon, two astute pigs, Snowball and Napoleon, emerge as leaders in the Rebellion. When they successfully overthrow the incompetent human owner, they reestablish the farm as “Animal Farm,” and the two assume command of all the animals. If you know how the history goes down, you can pretty much imagine how this all turns out.
What charms me the most about this novel is that on the surface, it’s a light read about the struggles between two rebellious pigs. Yet, simultaneously, it manages to be so much more than that. You really have to love a story that is both serious and lighthearted at once.
If you haven’t had the opportunity to read this before sophomore year, I suggest you to give it a shot after you take European history. Orwell is so meticulous with his allegory that he even provides a pig-enacted parallel for the Great Purge that shut down freedom of expression in the Soviet Union. Few things feel better than actually understanding a historical allusion (which is the entire story, in this case).
Also, have I mentioned that Animal Farm is an incredibly short read? Instead of lazing around next Saturday afternoon, consider taking two hours off to indulge in this charming satire.

3. Paula by Isabel Allende (AP English Literature)
When you boot up the Wikipedia description for Paula, you’ll find that it’s classified

as a “memoir”–but it’s so much more than that.
An incredibly personal story, Paula was initially penned by Allende as letters to her comatose daughter, who fell ill to porphyria in 1991. These letters begging for her eponymous daughter to regain consciousness eventually developed into a full-length family history, which is an impressive story on its own.
The way she readily accepts what many call the “occult,” the way she speaks of her daughter’s existence… Allende truly possesses a talent of letting people into her own perspective, and of making her readers feel almost as deeply as she does.
As a Spanish student, I also enjoyed getting to know the nature of Spanish-speaking people more. A remarkable feature I’ve found across almost all Spanish texts is the incredible openness of expression, whether the subject is sexuality or tragedy, and Allende exhibits this quality at its best. Additionally, as Salvador Allende’s niece, she also provides an interesting take on Chile’s descent to military dictatorship.
Though the book starts off slowly, it eventually pulls you in with such force that you can’t help but tear up when she goes: “In terms of the cosmos and the long course of history, we are insignificant; after we die nothing will change, as if we had never existed. Nevertheless, by the measures of our precarious humanity, you, Paula, are more important to me than my own life, or the sum of almost all other lives.”
That quote alone sums up how meaningful Paula is to its author, and how much potential it has to mean something to you, too. Whether you care for Allende’s life story or not, this book will surely get you to do just that in one way or another.