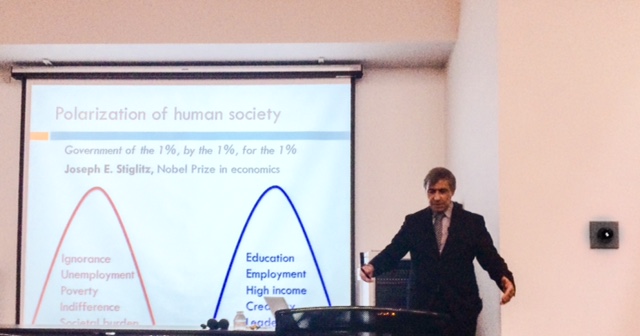 By Shereen L. (9)
In a world with a rapidly growing population and diminishing resources, it is easy to believe that we are approaching the end of the world. Yet, humanity is better than ever, said Israeli chemist Ehud Keinan, in his speech at TAS. But what about the decrease of natural resources? Our battle against diseases? The depletion of drinkable water?
“These challenges will all be overcome,” said Keinan, “because the growth of knowledge is explosive.”
Keinan explained that as the human population multiplies, so does the number of innovators who can create solutions for humanity’s problems. In fact, 90% of all the scientists in our history are still alive today. This has set a remarkable change for our overall quality of life.
“Think about the iPhone, tablet devices,” Keinan said. “There are so many product categories, solutions that could not have possibly been envisioned…before they were actually invented.” He believes that the unpredictability and growth of science has the potential to provide what we need to preserve mankind. One example is that the percentage of the population with access to clean water has increased by over 50% in the past 40 years.
Dr. Keinan was the second Science Research Speaker this year invited to speak at TAS. “We look for a variety of research speakers, anywhere from Biology, to Physics, to material science, and so on, because we want anyone who’s interested in science at TAS to see what’s happening in the real world,” explained TAS’s head of scientific research, Mr. Clapper.
For those who are interested in this speaker series, Micheál D. Scanlon, a chemistry professor specializing in electrochemistry, will be speaking on October 8 during flex. More information about his talk will be released soon.