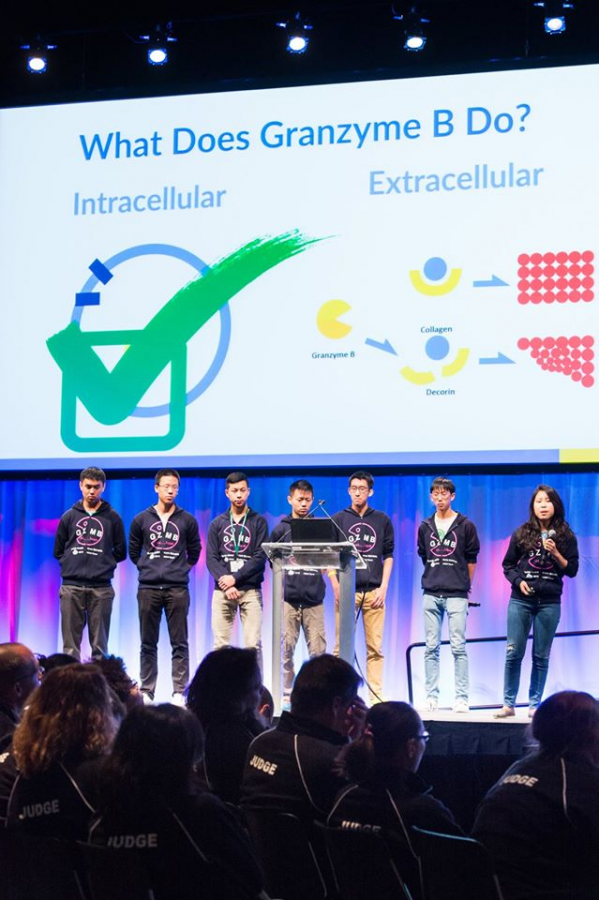 by Catherine L. (9)
The TAS team of nine students won the grand prize for the high school division of the iGEM competition at the Massachusetts Institute of Technology, taking place from September 23 to September 30. It also won three other awards and was nominated for another four.
The Internationally Genetically Engineered Machines (iGEM) is a competition for high school and university students where students present their synthetic biology projects. TAS students have been extremely successful with iGEM in the past even though they’ve only been attending for two years. Last year, they won the second runner-up award, the best website award, and the people’s choice award for best project.
Creating a synthetic biology project is an eight-month-long process including researching, experimenting, and creating a website. Students design their own project and then build it by cutting apart DNA, inserting new pieces, and reassembling the DNA in bacteria, so that the bacteria can fulfill its purpose. This can range from serving as a nightlight for children to cleaning polluted water.  “I think of synthetic biology as building new animals or hacking DNA to create your own superpower,” said Leon Y. (12), the project leader for this year’s iGEM team. “Being able to present our project in front of more than 3000 people as high schoolers and have judges, university students, and other synthetic biology experts listen and give feedback was an absolutely unbelievable experience.”
To secure their grand prize win, the TAS team engineered a biological system that controls production levels of Granzyme B, an enzyme that breaks chemical bonds. The enzyme is particularly important for the human immune system because it can cause cell death in response to tumors or inflammation. However, if too much Granzyme B is produced in the body, it starts to randomly break the chemical bonds needed to maintain tissue structure and elasticity. This can result in arthritis or prolonged wound healing. To solve this problem, the team modified a molecule already present in humans to limit the production of Granzyme B without affecting its functions in the immune system, and created a bandage to deliver the molecule into the body.
TAS students Fiona T. (11) and Huiru H. (11) worked alongside the National Yang Ming University iGEM team instead of the TAS high school team. The NYMU team competed with teams from MIT, Harvard, and other elite universities.  Their project prevents, detects, and cures Phytophthora Infestans, a virus that killed 90% of potatoes during the Irish Potato Famine. “People feel connected to it because that disease still happens everywhere, all over the world, so we thought that was a good topic,” said Fiona. The NYMU team won a Gold Medal, which is awarded to one in every three university projects.
Fiona enjoys learning about  “a field our school doesn’t really touch upon” in science classes, but the team-oriented nature of iGEM is important to her too. She explains, “[I joined iGEM because] I like the idea of a team starting from scratch. We decide on a topic, we work on it, and we realize that there are a lot of difficulties. [But] as a team we overcome a lot of those [problems] together.”
Mr. Clapper, the team’s advisor along with Dr. Chiang, agrees that iGEM allows students to gain independence with their projects.  He explained, “Lots of times in a classroom, you’re told information, but you don’t ever really get to create science on your own. So I love that it’s student-run and it’s real research. [Students] give up their mornings, flex periods, lunchtime and after school time for 8 months out of the year, including summer. There is a reason why we won this year and were a finalist team last year: their dedication to scientific research and not running away when things get really hard.”