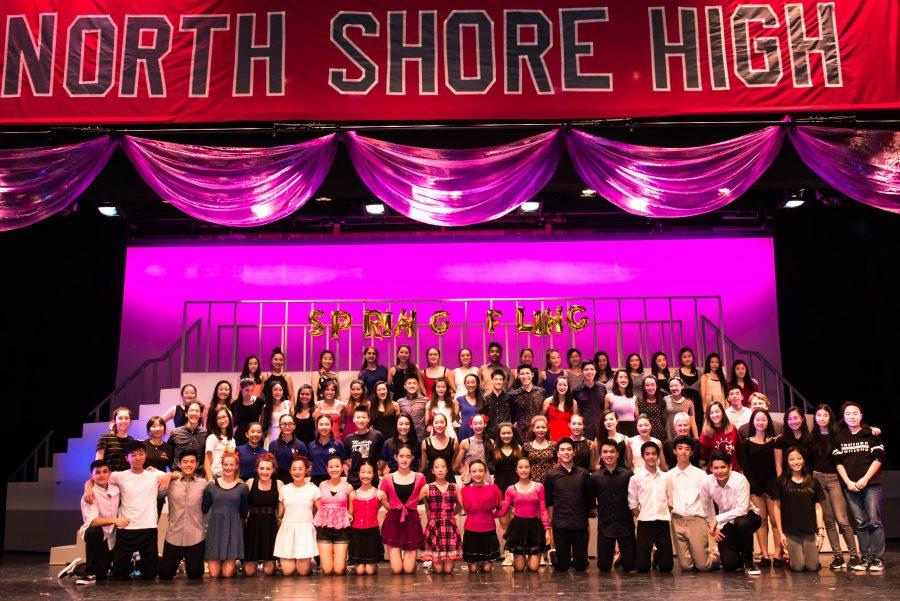 Desks, chairs, and students. The set seems like students are having class but instead of scholarly boredom, a passionate atmosphere fills the room. Dancers are walking around coolly, jumping around with flowy movements. The Fall Dance Production, “Mean Girls,” will run from November 17 to 19; this group of sassy dancers will greet you initially with a seemingly mean attitude but they will end up being the exact opposite.

This year’s Fall Dance production is loosely based on the popular 2004 movie Mean Girls and will be an entirely double-casted show. The female lead, Cady Heron, popularized by Lindsay Lohan, will be played by Emily C. (12) and Emma C.(12). Cady Heron movs to a new town after growing up in Africa and struggles to adapt in the school for the first time. Hilariously, the nerdy Cady undergoes a transformation and joins the popular girl clique called, “The Plastics” in an effort to dethrone the queen bee, Regina George, played by Wenny C. (12) and Annie Y. (12). Meanwhile, Cady falls in love with Regina’s boyfriend, Aaron, played by Jona H. (11) and Jeffrey Y. (12).

“It’s going to be so fetch!” says Ms. Flemming, one of the directors for this year’s production. “It’s been fun to work with something other than a love story and to work in comedy rather than a serious theme.”

This year’s production will be different than previous years for having a story that revolves around comedy and “well… I think a lot of people already know the story [from] the movie. The story won’t have surprises necessarily. But… people will be looking for moments that they saw or enjoyed in the film and we hope we hit most of the high points,” says Ms. Flemming.

While difficulties often arise during all student productions, that’s what the cast and crew think makes the production even better. “For me, finding the music [was challenging] because so many songs are written about love. Trying to find music that sort of helps carry the story of cliques and rivalries was not easy,” says Ms. Flemming. And Ms. Lagerquist adds, “[It is also hard] trying not to repeat movement because [some of the music] has similar feel.”

“It’s going to be GROOL (When Cady tried to say Great and Cool at the same time),” says Ms.Q. This year’s production, mostly focused on introducing the character and cliques and less on them trying to revenge, will deliver comical gags but also lessons on the girl world through a variety of dance genres.

The first performance will be tomorrow at 7:30. Be prepared for a fun and exciting show!