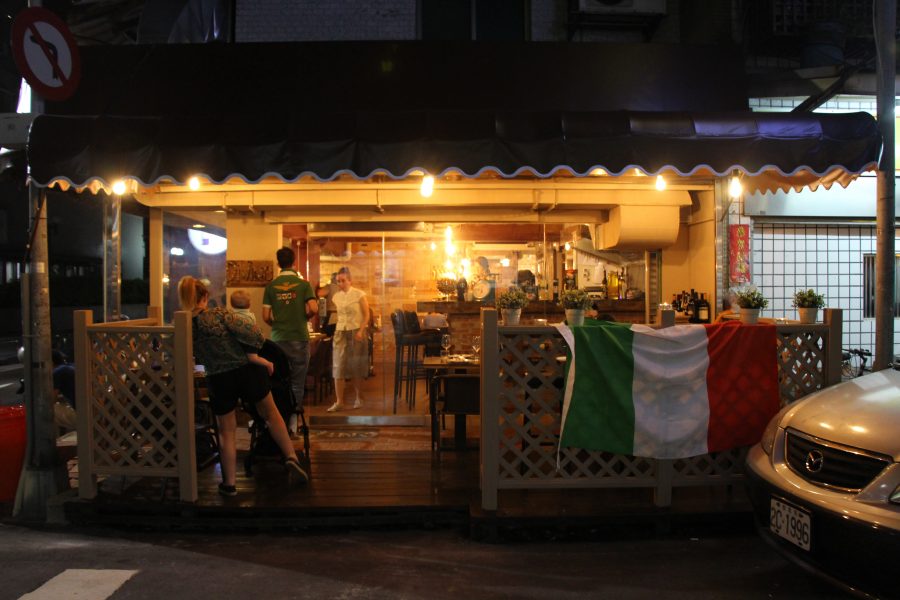 What? Homemade Italian food and wine

Walking into the cozy atmosphere of the newly opened restaurant, DiVino, the aroma of Italian food fills your senses and puts one thought into your mind: “this food is going to be good.” DiVino is an Italian restaurant that serves homemade food and wine.

Opening DiVino was a life-goal of Chef Enrico Duim Negrini.  Ever since he was a kid, Chef Enrico wanted to be a chef.  He strived to achieve this goal and did not let anything change his mind, whether it was the divorce of his parents or moving to Taipei, a city that has a completely different culture from his hometown in Italy. Since his father, who was passionate about the culinary arts, also lived in another city and owned a restaurant, he says, “[As a child], I would connect with my father because he also likes to cook… maybe I wanted to impress him.”  The determination to impress his father led him to become the head chef of the Cirque du Soleil VIP section, work at Michelin-star restaurants, and work at La Piola, another Italian restaurant in Taipei.

When Chef Enrico finally found the opportunity to open his own restaurant, “everybody, including [his] mother’s side of the family, was happy because they knew [this] was [his] dream.”  Having been a chef for 7 to 8 years, Chef Enrico never gave up on himself. He says that “[he] had some issues here with the neighbors but [he] just [takes his] time and [tries] to talk with them.” He says, “Time will bring you answers.”

As a dedicated chef, Chef Enrico says, “I built everything in the restaurant… like this table… and the back wall which is made of wine boxes.” The restaurant has a modern feel but remains cozy as there aren’t many seats. This is because Chef Enrico wants to be able to talk to the customers easily.

Although there are many good restaurants around the area, which attracts many tourists, Enrico doesn’t consider other Italian restaurants as competition.  He says he is “much more beautiful” than all the other chefs. Chef Enrico is also glad that his restaurant and others benefit the area as he believes, “good restaurants create beautiful neighborhoods.”

When asked about the name of the restaurant and where it comes from, Chef Enrico says “the name Divino literally means ‘divine from god,’ but in Italian ‘Di Vino’ also means ‘from wine’.”  This pun not only says that the restaurant’s food is divine, but also exemplifies Chef Enrico’s main goal for his restaurant: to give Taiwanese people a taste of Italian culture and spread the culture of drinking wine not to get drunk, but to be paired with food.

Overall, Divino is undoubtedly a restaurant  worth trying when you are downtown.  Not only can you enjoy good food, but you can also chat with Chef Enrico: we promise he has a good sense of humor!

Affettati Divini is a cold cut platter which includes prosciutto, salami, tuna casserole, and capicola.  As Chef Enrico is not allowed to bring this meat into Taiwan from other countries, he makes his own salami. He says, “We put on salt on the meat which reduces the water and causes it to become really hard. Then we hang it for 6 months until it is ready.”  Although the process takes a long time, Chef Enrico is dedicated and passionate about his work.

Risotto Porcini e Tartufo is an mushroom risotto dish. The texture is al dente, which means “to the tooth” and implies that the food is cooked so it is still firm when bitten. The wide variety of mushrooms in the dish, including the Italian-native Porcini mushroom, gives the dish an earthy flavor and produces a sour and somewhat tangy taste. The sour taste, which is common in many Italian mushroom dishes, comes from the dried porcini that Chef Enrico grinds into powder to further bring out the mushroom flavors.

Pappardelle Pork Gatorio is an Italian shredded pork pasta dish. Chef Enrico says, “Pappardelle is the thickest Italian pasta there is. This dish is my favorite.” Braising the pork for a long time makes it incredibly tender. We all undoubtedly loved the perfectly cooked al dente texture of the pasta and the tenderness of the pork. The sweetness of the tomato also compliments the mildly spicy peperoncino (Italian pepper that is usually put in pizza) used in the dish. This dish is a must try!

Sacrilegio D’angello is a rack of lamb served with roasted potatoes, peas, and homemade ricotta cheese.  The lamb is cooked at a low temperature for a long duration in a sucive, a type of slow-cooker, making the meat tender. For lamb lovers, this dish is perfect the lamb is tender, and also the ricotta cheese compliments the lamb’s taste, while the potatoes adds a contrast to the meat’s tenderness as they are crunchy.

Although Tiramisu is a common dessert in restaurants around the world, Chef Enrico uses his creativity to make his dessert stand out among the others. According to Chef Enrico, “tiramisu translates to ‘take me to heaven’,” and that is the literal definition of this dish. The bottom layer consists of a fluffy sponge cake and a cream base.  The creamy texture of the mascarpone cheese and custard compliments the crunchy texture of the ladyfingers soaked in coffee. Unlike many other tiramisu desserts, the cream is not heavy and nauseating and is instead fresh and light.