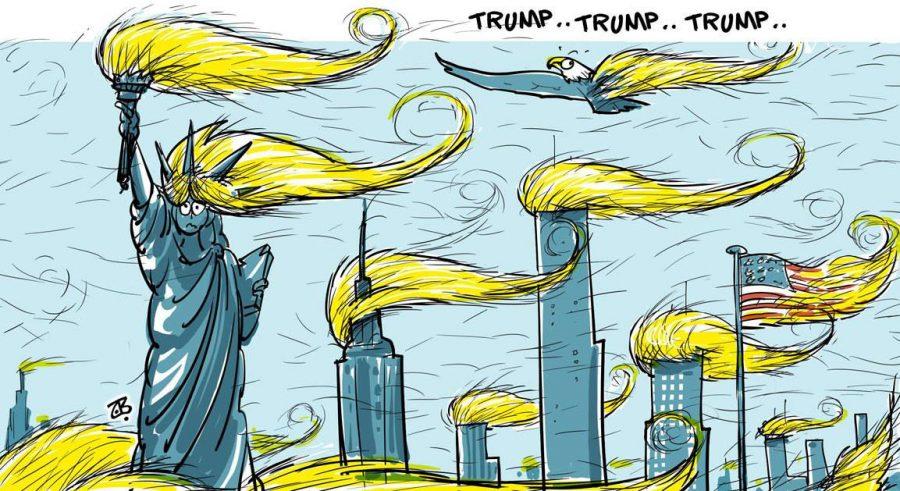 Donald Trump is a racist, arrogant bigot who should not  be the President of the United States. Donald Trump, as a public figure, has acted inappropriately towards multiple parties.

To start, Trump ignored an invitation to speak at the National Association for Advancement of Colored People’s annual convention earlier this year before finally declining it. Speaking at the NAACP is a tradition that all presidential candidates take part in. It almost seems like he knows that he will not be able to get through to them. A study by the University of New Orleans reveals that David Duke, a white supremacist who formerly served as Grand Wizard of the Klu Klux Klan, has more popularity with African Americans than Trump does. The survey’s results show that Donald Trump has a lower approval rating among blacks in Georgia than David Duke.

In addition, John O’Donnell, a former Trump executive, alleges in his 1991 book, Trumped! that Trump once said, “Laziness is a trait in blacks.” Trump seems to corroborate his remarks, saying in a 1997 Playboy interview that “the stuff O’Donnell wrote about me is probably true.” He does not even care enough to apologize for or deny his comments. So while Trump may be trying to appeal to African-Americans now, it is clear that at heart, he harbors racist views towards them.

Trump does not just discriminate against the African-American population; he has also repeatedly targeted Latinos in America. Trump has said that he wants to build a wall on the American-Mexican border, and make Mexico pay for it. He once tweeted, “People say my wall idea is crazy. China built a wall, and guess how many Mexicans they have.” While I realize that this is an attempt at humor, it does highlight his stupid logic. He is talking about a wall that would span, give or take, 1900 miles. And of course, no president has the ability to turn to an allied country and force them to pay for something. That is not how diplomacy works. Mexican president Pena Nieto did not stand for Trump’s ridiculous comments. “At the start of my conversation with Donald Trump, I made it clear that Mexico will not pay for the wall,”  he tweeted after meeting with Trump in August. Good job offending an entire country before you have even been elected, Trump!

And then there is the Khan family fiasco. At the Democratic National Convention this year, the Muslim Khan family, whose son was slain serving in the US armed forces and posthumously awarded the Gold Star medal, spoke out against Trump. Under Trump’s proposed immigration laws, the Khan family would have been forbidden from entering the United States at all. Khizr Khan challenged Trump, asking him if he had read the US Constitution. Trump’s response? He claimed that the Khans did not have a right to say that about him — which they do, according to the First Amendment of the US Constitution. In addition, he also claimed that Ghazala Khan, Khizr’s wife, did not speak because of Muslim racial sexism – sure, that is what you should be focusing on man.  Contrast that with former president George W. Bush’s response to a woman who said similar things about him: “ …listen, I sympathize with Mrs. Sheehan. She feels strongly…about her position…she has every right in the world to say what she believes. This is America. ” This is nowhere near Trump’s response. Instead of respecting the family’s loss and right to free speech, he decided to go on the offense.

Finally, Trump’s Vice Presidential nominee, Mike Pence, recently said, “I don’t think name-calling has any place in public life.” This is ridiculous, considering that he is running alongside Donald Trump. According to the New York Times, Trump has already insulted 258 people, places, and things on Twitter. What is ironic is that at almost the same time Mike Pence tweeted that, Donald Trump was tweeting stuff about “Crooked Hillary.” It is absurd how Donald Trump has no concept of political correctness. Even before being elected, he has already slandered Angela Merkel, a Saudi Arabian prince, and the nations of Britain, Iran, and Mexico. I just love how he is ruining America’s relationship with various major nations even before setting foot in the Oval Office. And make no mistake, even if he is not elected, these blemishes will not go away overnight. He is tarnishing political ties simply by being nominated and having the support of a large sector of the American voting population.