The countdown (and count up) to the end 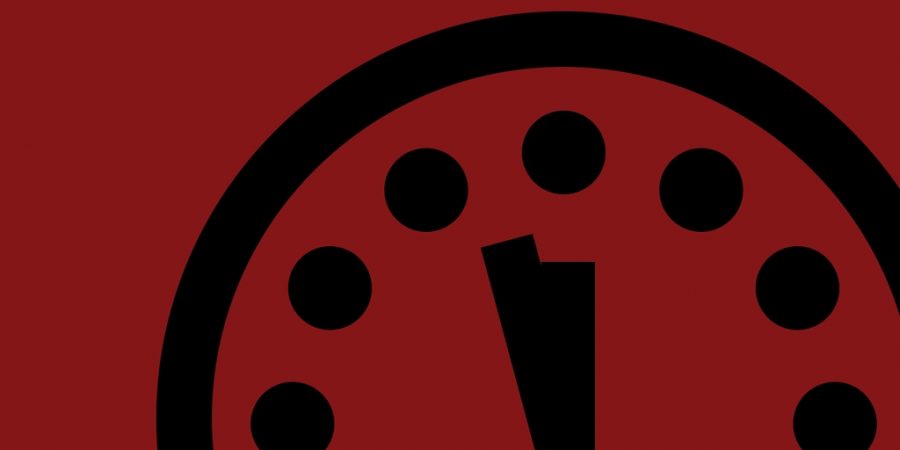 In the age of sci-fi movies and dystopian fiction, the end of the world is something we have probably pondered. Contrary to popular belief, some scientists assert that this end is not as fantastical and far off as we all imagine.  Many factors contribute to their arrival at this conclusion, especially the looming possibility of a nuclear war and rapid depletion of our natural environment.

The doomsday clock is a metaphorical clock representing the time humankind has left until global catastrophe. When the clock strikes midnight, that is, supposedly, the end. Within its sinister and merciless evaluation of what seems to be constant global deterioration, there is a fascinating and admirable aspect of the science that goes into creating the countdown to our demise. According to the Bulletin of Atomic Scientists, periodic updates of “clock movement” are announced, then explained by how the change or continuation has come to be. As of 2016, it is “3 minutes to midnight” or 11:57pm. The Bulletin further explains “The probability of global catastrophe is very high, and the actions needed to reduce the risks of disaster must be taken very soon…. the Clock ticks. Global danger looms. Wise leaders should act—immediately.”

The clock does not sugarcoat in the slightest. It unapologetically frightens its readers: “…climate change, global nuclear weapons modernizations, and outsized nuclear weapons arsenals pose extraordinary and undeniable threats to the continued existence of humanity and world leaders have failed to act with the speed or on the scale required to protect citizens from potential catastrophe. These failures of political leadership endanger every person on Earth…The clock ticks now at just three minutes to midnight because international leaders are failing to perform their most important duty—ensuring and preserving the health and vitality of human civilization.”

To call “three minutes to midnight” unideal is an understatement. Although a “minute” on the doomsday clock does not translate definitively to any length of time in the real world, the Bulletin of Atomic Scientists uses this undefined unit to claim that global catastrophe is not too far along the line.

However, not all sources agree with the Doomsday Clock. Scott Brown, writer for Wired Magazine, bluntly targets the “clock-ness” of it all, and says, “What self-respecting nonquantum chronometer rides back and forth over the same patch of time for 50 years, anyway?” Other organizations also raise different points on why the clock is pointless. Michael D. Lemonick (Scientific American) claims that the clock simply measures worry, mocking that the clock basically says “Hey, how worried are you? I’m really worried. I’m like, a whole minute more worried than I was last year.” Humor aside, the credibility behind the Doomsday Clock science is somewhat shaky. According to the Doomsday Clock’s FAQ site the time the clock was set to at its inception was decided upon because “it looked good to my eye”.

Without quarreling over details, it is easier to agree on the fact that danger simply does exist. The race to stop global warming seems to have turned into a game of hot potato, with countries passing the blame around without making an effort change. An example of this would be the Paris Talks. In December of 2015, the governments of 190 nations all around the world gathered in Paris to discuss the growing threat of climate change and create a new framework aimed at reducing CO2 emissions.

The Paris Talks were a year ago and the world has officially passed the 400 ppm (parts per million) mark for CO2 as of the beginning of last month. Most of the scientific community agrees that now, global warming might be irreversible. A safe environment would have 350 ppm of CO2, a number that we are already well over. Although the effects of climate change have shown themselves through natural disasters and rising temperatures, amongst other consequences, those changes will worsen if efforts are not made to .

Nations submitted their own climate plans to the UN in the last few years, and therefore should be held accountable for whether or not they reach their goals. The problem with these plans doesn’t arise with whether they are achievable or not but whether the plans will be an adequate solution. The answer, currently, seems to be that even with these plans enacted, global warming will not be solved. The current projection will lead us to a 4 degree global temperature according to Climate Action Tracker on Vox magazine. If nations follow up on their pledges, there won’t be much of a difference with a 3 degree global temperature.

The threshold we need to stop ourselves from crossing is 2 degrees. So either way, we seem to be on course for doomsday.